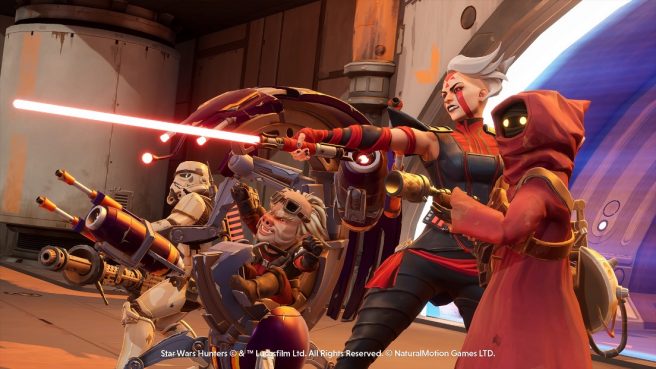 Zynga shared more on Star Wars Hunters this week, revealing new Hunters for the game as well as Huttball and new maps.

As far as the Hunters go, we’re introduced to Skora and Sprocket. Huttball is a Squad-vs-Squad match. Finally, the new maps include The Great Hunt, Dusty Ridge, Gauntlet, and Highline.

Here’s the full rundown on the new Hunters, Huttball, and new maps for Star Wars Hunters:

The Outer Rim attracts Hunters to be reckoned with, and the two new additions are no different. Meet Skora, who you’ll rely on for smuggled medicine and combat boosters. And welcome Sprocket, who can reprogram a droid faster than you can say, “Ingenious”. Get ready to welcome them to the Arena soon.

Skora is a chemistry genius. Now chemistry is a very broad subject so let’s break it down a little. Skora uses her fiendish intellect to engineer stims for allies and poisons for enemies. Skora’s personality is off-putting to some, as you can never tell what she really thinks of you. If she’s cackling, it’s a signal that she’s plotting a prank. She is exactly the kind of scum and villainy you want on your team.

Skora shoots stims through her dart gun to auto-heal her teammates. She does the same with her enemies, but she shoots poison and the darts do the opposite of heal.

Skora can also throw an Ult, which is a large canister, in the middle of a battle creating a pool that heals allies and hurts enemies.

Sprocket is a whiz kid and bonafide technical genius. He more than makes up for his lack of brawn with his quick thinking, fast reflexes, and superior technology. He’s also a passionate fan of Hunters of the Outer Rim, and his childlike enthusiasm can warm the hearts of even the toughest members of the audience. His super-advanced droids and weaponry are unmatched.

Sprocket can deploy a medical droid that gradually heals his teammates.

He also deploys a turret which targets and damages nearby enemies. In general, if you’re on the other team and you see Sprocket deploy something, run.

The Outer Rim attracts all kinds. The villains, the chemists, the slicers. Team up with these two new Hunters and set the Arena ablaze with explosive excitement. Skora and Sprocket are here to play… and win.

The galaxy’s favorite sport, Huttball, has arrived in Star Wars: Hunters, and this Squad-vs-Squad match brings teamwork to the next level. What’s Huttball? Here’s a quick rundown.

Historically, Huttball was a brutal, full contact sporting event, beloved by fans for its speed and intensity. With the advent of sporting safety regulations, the game has, in theory, become safer for its players, but it sure doesn’t look that way when you’re watching it from the stands!

Huttball pits two teams against one another in a no-holds-barred attempt to gain possession of the ball and score against the opposing team. The huttball deploys in the center of the match and both teams race to gain control of it.

The Hunter who retrieves the huttball first can either run it towards the goal line or pass it to a teammate, and score by throwing or carrying the ball into the enemy scoring zone. The first team to hit the maximum score, or the team that has the highest score when the timer runs out, wins the match.

When the game is done, one team will bask in the glory and riches of their victory and one team will shamble away in defeat, wondering where it all went wrong.

We are excited for players to get try out Huttball during soft launch.

Beware the fabled Gorax! Four new maps are coming to Star Wars: Hunters. One will have you fighting in the shadow of a Krayt Dragon skull. And another will take you to the sandy dunes of a high intensity Huttball Arena. The other two new maps? Dive in and find out.

The objective of this map is all in the title, it’s a hunt! Escort a giant harpoon through Tatooine to the forests of Endor in pursuit of the fabled Gorax. Right now you’re probably asking yourself, why the harpoon, and what’s a Gorax? When in reality you should be asking yourself, will you be defending the fabled beast, or hunting it?

Many iconic scenes in Star Wars have something very small in common; sand. Get gritty in this latest Tatooine based Huttball map where there’s a lot of sand to go around. Jump down into the dunes and dominate your rivals in one of Vespaara’s first Huttball Arenas.

Equally entertaining and dangerous. The Gauntlet is a Huttball map filled with traps and obstacles (from fire to electricity), which you will need to navigate to score for your team. Surviving the Gauntlet will make you feel like a prized gladiator, even if you get scorched.

They’re fast, perilous and perfect for an Arena filled with hungry-for-battle Hunters. Enjoy exploring and riding the central zipline in this Huttball map. Hold on!