STAY heading to Switch this summer 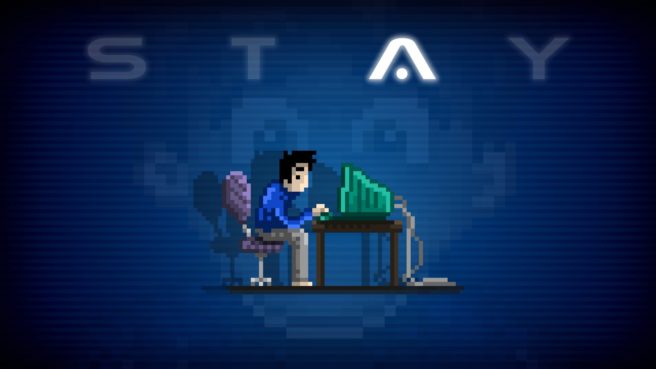 STAY is coming to Switch, PQube and Appnormals Team announced today. A release is scheduled for this summer.

STAY, a pixel-art adventure game featuring multiple routes and endings, involves a therapist named Quinn who finds himself trapped in a strange room with only a computer hooked up to an internet chat room. It’ll be your job to help him escape.

STAY follows the path of Quinn – a therapist who wakes up alone, locked in a strange room with nothing of note save for a computer hooked up to an internet chat room. Said chat room has one other member, however: You.

It’s up to you to try and help Quinn escape, making suggestions in real time that either guide Quinn to safety, or closer to his ultimate end. What would you do if a stranger’s fate rested in your fingertips? And how would you cope if every second could be the difference between life and death?

STAY plays out in real-time, meaning that every minute spent away from the game is a minute Quinn is left alone. Drop out of conversations or leave Quinn to fend for himself for too long and there may be consequences to your actions.

Quinn is on edge, and every response matters. Prove yourself a compassionate ally and he’ll learn to trust you and share both his findings and deepest thoughts. Fail, and his emotions may work against you.

Webcams around the environment and on the computer enable you to watch and analyse Quinn’s reactions, mental state and actions while he is Away From Keyboard. Pick up on his lies, use that knowledge to your advantage and uncover the truth at the heart of STAY.

Help Quinn get the better of the conundrums he encounters inside his prison by taking direct control of his actions during numerous puzzle sections.