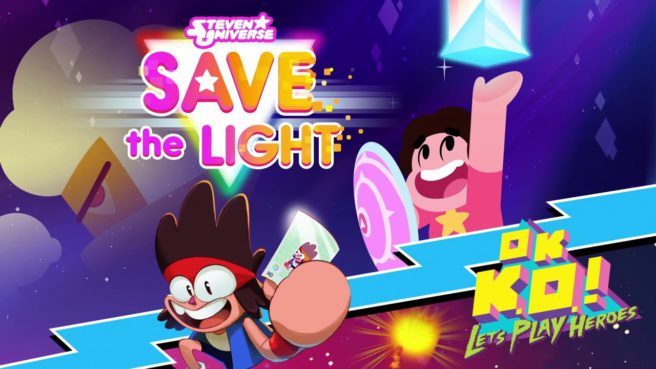 Steven Universe Save The Light and OK K.O.! Let’s Play Heroes made it to the Switch eShop last October. Many months later, a physical copy is now available at retail. The package contains both games on a cartridge.

Here’s some information about the two titles plus a trailer:

Steven Universe Save The Light

Join Steven and the Crystal Gems on their biggest quest yet in ‘Steven Universe Save The Light’! A mysterious new Homeworld Gem has stolen the Prism, a powerful weapon that can create an entire army from light–and she’s already started destroying Beach City. Only you and your team can battle back to save the light (and the world) in this hybrid RPG based on the hit Cartoon Network show.

PARTY TIME – Team up any of the Crystal Gems plus Greg and Connie, each with unique puzzle-solving, combat and fusion abilities
FIGHT WITH FUSIONS – Incredible Gem Fusions let you play as Stevonnie, Smoky Quartz, Opal, Sardonyx, and Sugilite
A NEW GEM – Created by Rebecca Sugar, who is Hessonite and why is she wrecking Earth?
OK K.O.! Let’s Play Heroes

Based on the hit Cartoon Network show, ‘OK K.O.! Let’s Play Heroes’ stars pint-sized hero K.O. as he punches, slide-kicks, combos and power-moves his way through hordes of evil Boxmore robots on an epic quest to save Lakewood Plaza Turbo from the maniacal Lord Boxman. In this story-driven adventure game meets action-packed cartoon brawler, level up your stats to unlock powerful new fight moves, collect the cards of all your favorite Plaza characters and then call them into battle to unleash off-the-wall attacks across tons of crazy quests.