Story-driven management game Tattoo Punk in the works for Switch 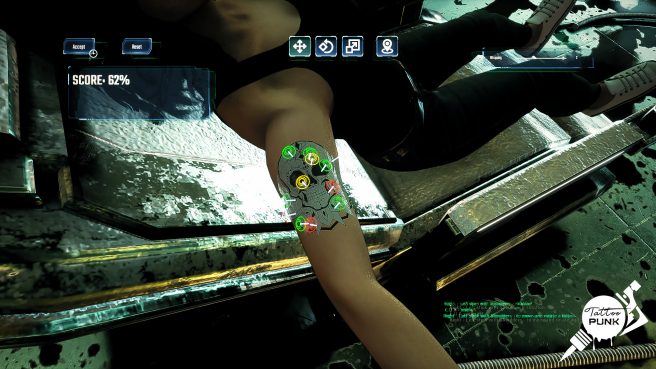 No Gravity Games and VARSAV Game Studios have announced Tattoo Punk, a story-driven management title in which players customize a tattoo studio, make futuristic tats, and grow their business and brand. The project will be released on Switch.

The year is 2100. The world has gone forward as much as it’s gone backward. The corruption runs rampant and corporations have their fingers in every aspect of life, and the social divide has never been greater. This is the latest stage of capitalism – selling your kidney to afford next month’s rent. But living in the future has its benefits – technology, body mods, neon tattoos… And that’s where you come in, Henry.

You’ve had a rough childhood but you made it out of the rathole. You had a life, a family, stability. Until she died. Now you have to fend for yourself and take care of your son. So, you gotta do the only thing you’ve ever been good at – tattooing. Well, maybe it’s not the only thing you’re good at, but ain’t nobody gonna pay you to get into barfights. So, you took out a loan, now you gotta hustle. Don’t worry though, I have a feeling your first client is just around the corner.

You are the artist. Unleash your creativity to design beautiful, massive, aggressive, meaningful tattoo patterns and transfer them to the skin… or mechanical augments.

…so you better make dough – Tattoos are awesome, yes, but what about money? Surviving in the city isn’t cheap, so use your silver tongue to bargain for the best price for your work. Sometimes you will earn more than you should, sometimes the business goes south.

But remember – you are not only an Artist – you are also an owner, which means you must take care of proper advertisement of your tattoo parlour or manage your socials, because various opinions might help or hurt.

An exact release date for Tattoo Punk hasn’t been announced. However, No Gravity Games says it will be available “soon”.