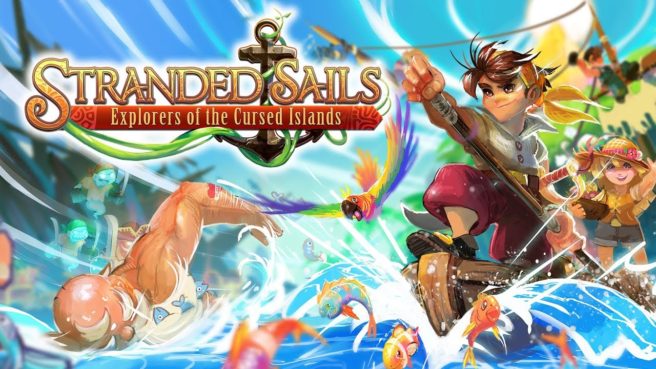 The open-world farming adventure Stranded Sails has received a major “Exploration Update”. The patch, which includes new features, changes, and bug fixes, is live on Switch.

As far as what’s new, fast travel ‘portal stones’ have been added which allow you to travel around the world with ease, Quality of life improvements include the ability to craft and cook multiple items at once, improved introduction and tutorial quests, and a new ability to row faster across the world.

– Fast travel via portal stones While exploring the Cursed Islands you will now encounter ancient portal stones. Find and activate them to be able to use key shards and crafted portal keys to travel between all of the ones you have discovered!
– Improved rowing gameplay While on the high seas you will now encounter seagulls chasing flotsam. Use your new ability to row faster to race them and reach the floating treasure first to collect various items!
– Craft and cook multiple items at once To save time, you can now craft and cook multiples of the same item. Increase the amount of resulting items while a blueprint or recipe is selected and create them all at once!
– Improved intro & tutorial quest line The quest line up until you get your rowboat has been streamlined to not only give you more explorative freedom early on, but also allow you to explore the Cursed Island more quickly after setting sail!(Bearbeitet)
– The interaction indicator is now more informative. It now displays an icon corresponding to the tool(s) you need to equip to interact with certain objects.
– Added translations for all remaining languages besides English and German. Setting your in-game language should now properly apply and display it within the game.
– Added a sound effect for activating a portal stone.

– Adjusted various energy costs:
– Walking and rowing are now free, sprinting and rowing faster costs energy.
– Adjusted energy costs of tool usage to compensate for the now free movement.
– Rebalanced fishing energy costs for fish within each tier to be more similar in overall energy required to catch it.
– Improved in-game explanation and communication for the recipe discovery system.
– Items dropped are now picked up more reliably, resulting in you having to now walk over each dropped item.
– Selecting your map via its shortcut will now instantly open instead of equipping it.
– Potatoes, onions and carrots will now be dug out automatically after harvesting them.
– Added day, daytime, buff duration and description display. Open your tool selection to view these details.
– You can now hold down the interact button to cut down trees and bushes.
– You are now able to skip the stew for the crew UI animation after starting one.
– Changed most containers in the world to be opened with a specific tool, adjusted their visuals, contents, spawn and drop rates.
– Seeds are now gathered a lot less frequently while farming, and can instead be found more frequently while exploring.
– Added thorn bushes to various locations in the world, requiring you to cut them down with your axe to progress.
– Adjusted optional camp structure costs.
– Changed the interaction priority of equipped food, making it less likely to accidentally eat it while trying to interact with something else.
– Stew rewards can now be acquired more reliably from quest relevant NPCs.
– Reduced time it takes for fish to bite and increased amount of fish that can be caught in each fishing spot.
– Fixed an issue that could cause “jittery” camera movement.
– Increased all dialogue text scroll speeds and added an “instant” option.
– Improved formatting of Russian localization.