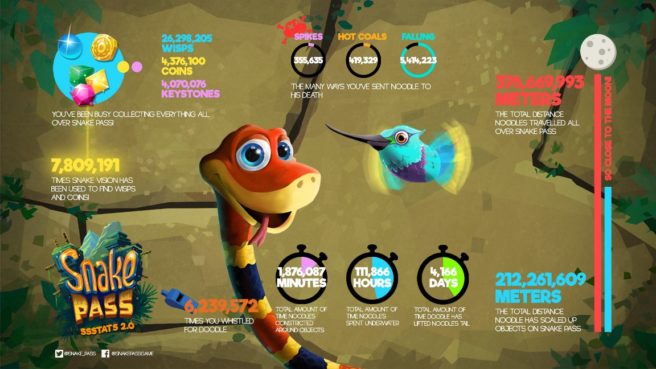 Yesterday, a major update went out for Snake Pass a year after its original release. It was highlighted by the addition of Arcade Mode, but also included a change for the game’s Switch feedback – following vociferous feedback from the community.

In a blog post today, Sumo Digital shares various stats for Snake Pass to celebrate the game’s first anniversary (see above). The company also went in-depth on the decision to change the game’s icon.

What sort of update would this be without us mentioning *that* icon?

Oh yes, we heard you loud and clear; the cries of a thousand anguished voices resonated across the internet in a singular chorus of torment, woe and agony.

We listened to your screams.

So – as well as a host of small performance improvements and additional features, the Arcade Mode update brings with it a BRAND NEW LAUNCHER ICON to all platforms.

“But why?” some of the more innocent souls among you may ask… let me give you a little bit of insight…

After we launched the game in March last year, we wanted to ensure the branding was unified across all platforms; everything needed to be consistent across the board.

Although some may consider this a small detail, to us it was important.

With an update rolling across all platforms last June, this was a chance to bring them all together under one singular Snake Pass update with one singular game icon.

Hindsight is 20:20, and in retrospect, removing the Snake Pass logo while focusing the iconography solely on Noodle’s face was clearly an unpopular choice … but to us at the time, it felt recognisable, bold and strong.

Feedback.jpg
Your responses stunned us; you guys hated the new design and that really hit home.

After all, we built this game for YOU.

Throughout development your thoughts and feedback were always welcomed, and to hear that you disliked something about the game, even something as apparently small as this, well – naturally we had to jump into action.

Despite making a decision that felt creatively right for us at the time, we’re pleased that the community cared enough to speak up and we’re glad to be able to respond; we’re not too proud to hold our collective hands up when we’ve gone awry…

So – without further ado, let us present you with the new Snake Pass icon! We hope you like it; hopefully, it’s strikingly familiar with a slight twist to satisfy us too.