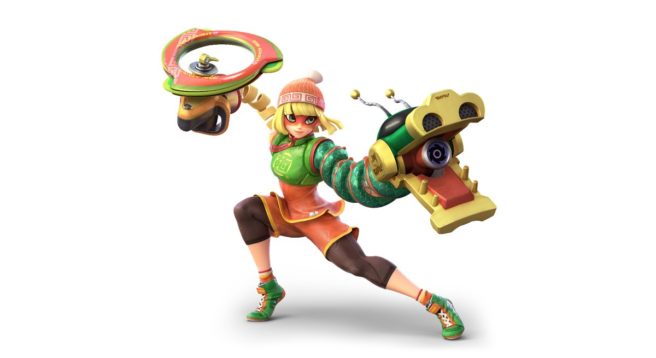 Nintendo has put out an announcement recapping the major news from today’s Super Smash Bros. Ultimate presentation, which revealed Min Min from ARMS as the latest DLC character.

Min Min, a member of ramen royalty from the Nintendo Switch fighting game ARMS, brings her own brand of bounce and bravado to the Super Smash Bros. Ultimate game! In a video released today, Masahiro Sakurai, the director of Super Smash Bros. Ultimate, showed off the ARMS character, who will be charging into the arena on June 29 as the game’s newest DLC fighter. Sakurai demonstrated how to truly pack a punch with Min Min, and revealed the Spring Stadium stage and 18 music tracks from the ARMS game, all coming to the Super Smash Bros. Ultimate game for the Nintendo Switch system later this month. To view the video in its entirety, visit https://www.smashbros.com/en_US/index.html.

All of this new content will be available to players who own Super Smash Bros. Ultimate Fighters Pass Vol. 2 or who purchase Challenger Pack 6 separately for $5.99. By purchasing Fighters Pass Vol. 2 for a suggested retail price of $29.99, players will get access to Min Min, along with five more yet-to-be-announced Challenger Packs as they release. Each pack includes one new fighter, one stage and multiple music tracks.

“Min Min from ARMS marks the first of six exciting new fighters joining the Super Smash Bros. Ultimate roster through Fighters Pass Vol. 2, broadening the diversity of unique fighters available to players,” said Nick Chavez, Nintendo of America’s Senior Vice President of Sales and Marketing. “As our support for the game continues through regular updates and DLC, Super Smash Bros. Ultimate remains the premier destination for video game fans to battle it out alongside many of the most iconic characters in video game history.”

Min Min is the 81st video game character included as a playable fighter in Super Smash Bros. Ultimate, with a roster representing one of the largest crossovers of video game characters in history. From her humble beginnings as a ramen-loving employee at the Mintendo Noodle House, to her knockout performance as a champion contender in the ARMS Grand Prix, it’s no stretch to say Min Min has made a huge name for herself. As a one-of-a-kind fighter, it’s only natural for Min Min’s fighting style in Super Smash Bros. Ultimate to be equally unique. Each of her extendable ARMS – the Ramram, the Megawatt and her laser-firing Dragon ARM – can be controlled individually and used to access a diverse range of tools.

Min Min’s accompanying stage, Spring Stadium, features a variety of interactive elements ARMS players will instantly recognize, including the ability to damage opponents when making contact with them after using a jumping platform. Foes will also bounce off the striking ceiling arches when they’re launched. The adorable ARMS drones will also make an appearance to deliver items that aid in battle, but make sure to approach them with caution when freeing boxes to claim their rewards!

In addition to this new fighter update, new Mii Fighter costumes, including Ninjara from ARMS, Heihachi, Callie & Marie from the Splatoon series and Vault Boy, will also be available as separate purchases on June 29.

Finally, two fighters from Super Smash Bros. Ultimate will have new amiibo figures available for purchase at select retailers at a later date: Joker, the masked phantom thief, and Hero, the slime-slaying Luminary.

Players can continue to purchase the Super Smash Bros. Ultimate Fighters Pass Vol. 1 at a suggested retail price of $24.99 to gain access to the first five Challenger Packs that were released for the game. Playable fighters Joker, Hero, Banjo & Kazooie, Terry Bogard and Byleth are all available now. For only $5.99 each, players can also purchase these previous packs individually.