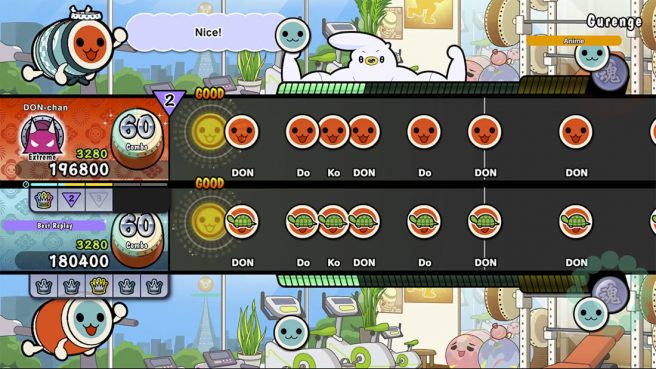 Taiko no Tatsujin: Rhythm Festival was shown off at Anime Expo 2022, and we have first gameplay from the upcoming Switch title.

Join Don-chan and your guide, Kumokun on a journey to becoming a Taiko master. With new songs and modes, your rhythmic adventure awaits!

The Story: Discover Omiko City, where the Taiko world is set. You will strive to become a Taiko Master along with your buddies, DON-Chan and Kumo-kyun!

Taiko Mode: Have fun playing Japanese Taiko with your favorite songs! There are four difficulty levels to choose from: “Easy,” “Normal”, “Hard”, and “Extreme” to match your skill level.

Party Mode: In “Don-chan Band,” up to four players take charge of different tones and play together to make a successful live performance. And in the “Great Drum Toy War,” you build your own deck of toys and battle it out!

Customize: Get “Don Coins” by playing various modes. Use the coins to get items such as costumes and name plates from the in-game store! Customize as you like!

Taiko Music Pass: Play over 500 additional songs from a variety of genres, on a music lineup with monthly updates.

Get a look at the gameplay for Taiko no Tatsujin: Rhythm Festival shown at Anime Expo below.

Taiko no Tatsujin: Rhythm Festival is due out for Switch on September 23, 2022.