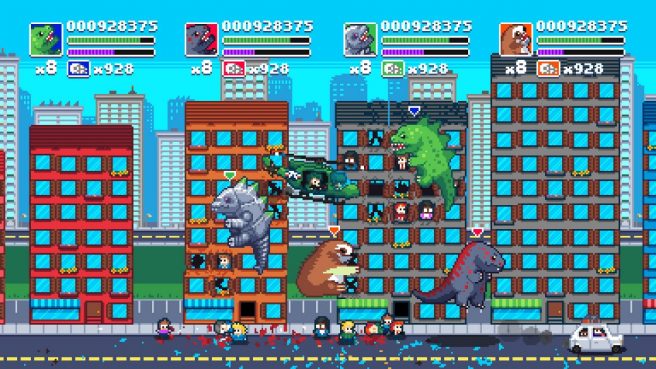 Publisher Digerati and developer Loren Lemcke today announced a final release date for the Switch version of Terror of Hemasaurus. The retro city smash ’em up will be out for the console on January 12, 2022.

Terror of Hemasaurus was confirmed for Switch in August 2021. It recently came to PC, but will soon be appearing on consoles.

Play as a giant monster and wreak havoc on humanity in this retro city smash ‘em up! Punch buildings, slap helicopters, eat humans, kick cars – enjoy multiple ways to cause carnage! Satisfying arcade action and mindless destruction for up to 4-players!

– MONSTERS! Hemasaurus! Clocksloth! Salamandrah! Autonomous Hemasaurus! Four terrifying (but also kind of adorable) beasts, each with their own killer moves!
– DESTRUCTION! Explosive pixel devastation and mayhem on a monstrous scale! Reduce buildings to dust. Topple skyscrapers. Destroy everything!
– DEATH! Hurl humans into helicopter blades! Butt slam into crowds of terrified citizens! Eat people for nourishment! Smoosh them all to save the planet!
– STAGES! Do what the game tells you across a variety of levels! Kick cars into buildings! Rescue the cats and dogs! Total a tower in record time!
– FRIENDS! Got buddies? Good for you! Put them to use by getting them to join you for some local co-op carnage! Up to four friends can cause terror together!

Find a new trailer accompanying the release date news for Terror of Hemasaurus below.

Terror of Hemasaurus will cost $14.99 on the Switch eShop. A 20 percent discount will be offered for a limited time.