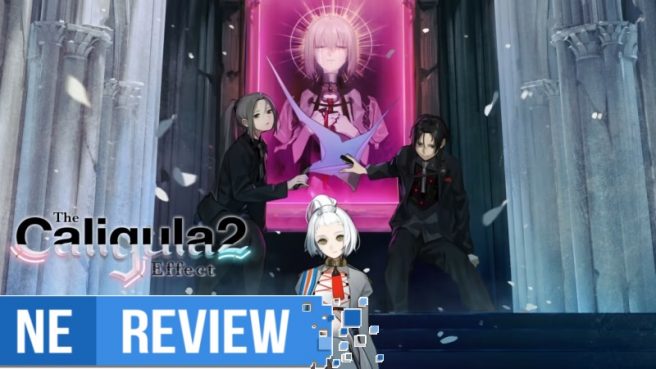 When The Caligula Effect first released in 2017 before receiving an enhanced port in the form of The Caligula Effect: Overdose in 2019 for Switch, one of the most exciting aspects about it was the fact that not only did it have this stunning art style, but also how it was being helmed by Persona writer Tadoshi Satomi. The game initially had a lot of appeal thanks to its vibrant color usage and idol-inspired dystopia that gave it a unique look by giving darkness and corruption bright colors – a palette that is typically used as an indicator for things that are heroic, harmless, or good. However, despite a respectable foundation, it suffered from repetitiveness, performance issues, and a lot of quality of life mechanics that simply were not there. Thankfully, The Caligula Effect 2 improves upon the original game’s problems and adds a lot of enhancements with a beautiful UI that’s intuitive. It also focuses more on putting actual gameplay in reasonably sized dungeons disguised as various Japanese districts and virtual landscapes without the egregiously poor pacing and constant stop-go nature of its predecessor.

For those that have played The Caligula Effect at any point since 2017, it’s easy to immediately spot the immense and favored differences its sequel has by making things seem much more sensible in every facet of its design from its dungeons, cutscenes, dialogue, battles, item management, world building, and more. Even for those that have absolutely no prior history with the series, RPG enthusiasts should find this to be an easy pick up that they can familiarize themselves with without any prior experience. The Caligula Effect 2 has a much more streamlined story with uses of terminology that don’t feel forced or like word soup, putting players in the shoes of a protagonist of their choosing (male or female) who finds themselves trapped in a false reality with others in the world and looking to go back home. While some have become corrupt and formed into what’s known as Digiheads due to the mind-controlling music caused by a variety of powerful beings known as Musicians, others like yourself are a lot more strong-willed and instead channel passion inside of them to unleash into “Awakened” versions of themselves to fight back and survive. 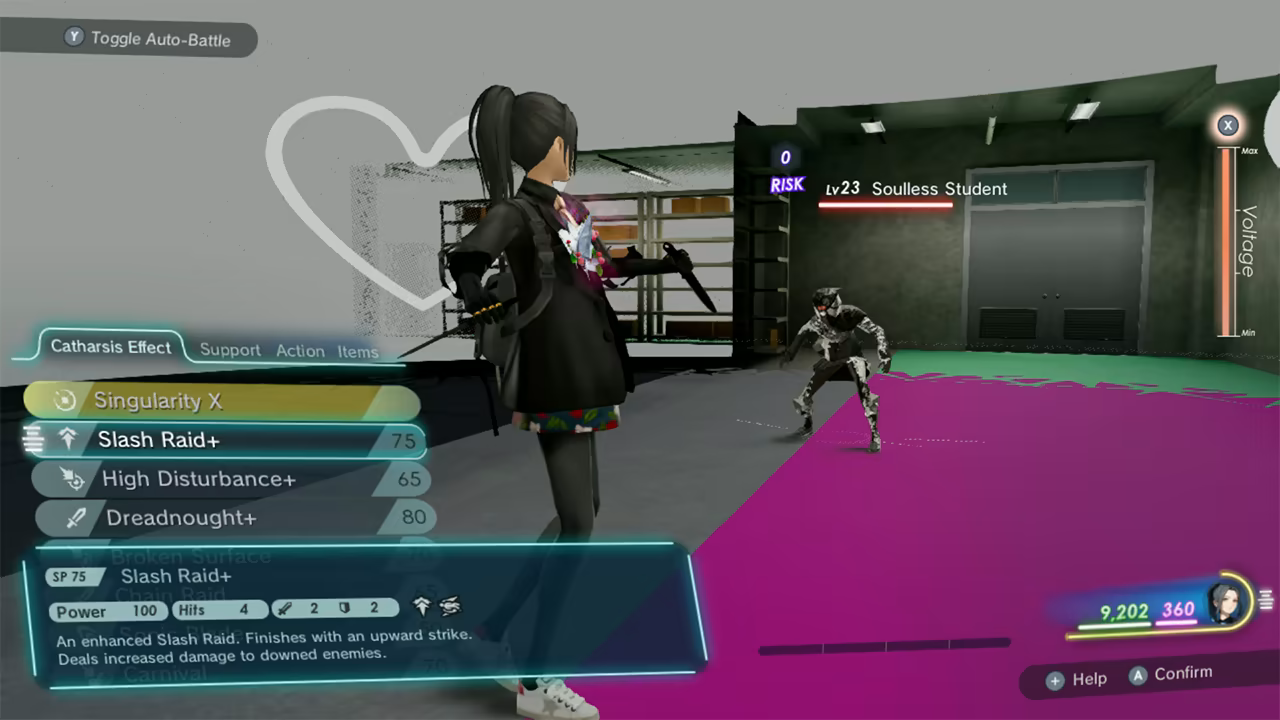 Truthfully, the plot isn’t much different from the original in the fact that a bunch of high school students find themselves in a virtual world ruled by musicians and is also guided by an idol to help escape, but the core function of the game, how it’s presented, progresses, and plays is much more refined from the first one and almost feels like a way to make up for how unnecessarily complex and frustrating the first one was. The Caligula Effect in a lot of ways also feels self aware of this as some of the names seem to hint at it almost in an Easter egg-esque way, with the previous world being called Mobius, and in The Caligula Effect 2 the world is called Redo. Additionally, its mastermind is called Regret and wants to recreate the old world. The idol that helps you out in The Caligula Effect 2, the VirtuaDoll X, is actually related to the original as X is the daughter of Micro (also nicknamed as “Myoo”) who led the corruption of the old world which X feels terrible about and is trying to atone by helping you out. The Caligula Effect 2 feels like an apology in a lot of ways whether intentional or not, but it adds to the overall atmosphere and narrative of the game as you come across others and their will to fight in a world filled with lies and deception disguised as happiness, and the crew you’re with, The Go-Home Club, will do what it takes to go back to what’s real, even if that includes a painful reality.

Despite my excitement when I initially booted up The Caligula Effect 2, I began to quickly have my doubts as the game spent quite literally the better part of an hour before I was able to finally be free of tutorials and dialogue before I could actually explore the starting dungeon, an abandoned subway station, and play at my own accord. This was giving me flashbacks to the first title where even well into the game you could still receive tutorials, dialogue exchanges, and cutscenes that well outweighed actual gameplay with its skewed approach to its RPG gameplay. Fortunately, after that first hour of surprisingly gripping material, the chains were set free and I was able to explore, fight, and play the game normally in a much more palatable JRPG way that feels equal parts modern and classic.

As it’s been with the previous Caligula Effect, the battle system is really where the game shines and stands out from your usual turn-based RPG. While you’ll still have your typical basic attacks and special moves known as the Catharsis Effect and Overdose respectively, it’s biggest feature comes from its Imaginary Chain system that gives you a glimpse of how your moves will play out in a predictive future sort of way. Each time you select your plan of attack, animated holograms will show you how the attack will be executed not only from your side but the enemies’ as well. Closely observing these moves will be key to ensuring maximum output damage and how you’ll sync with all of your partners’ moves as well as everyone has a different and complementary set of skills. 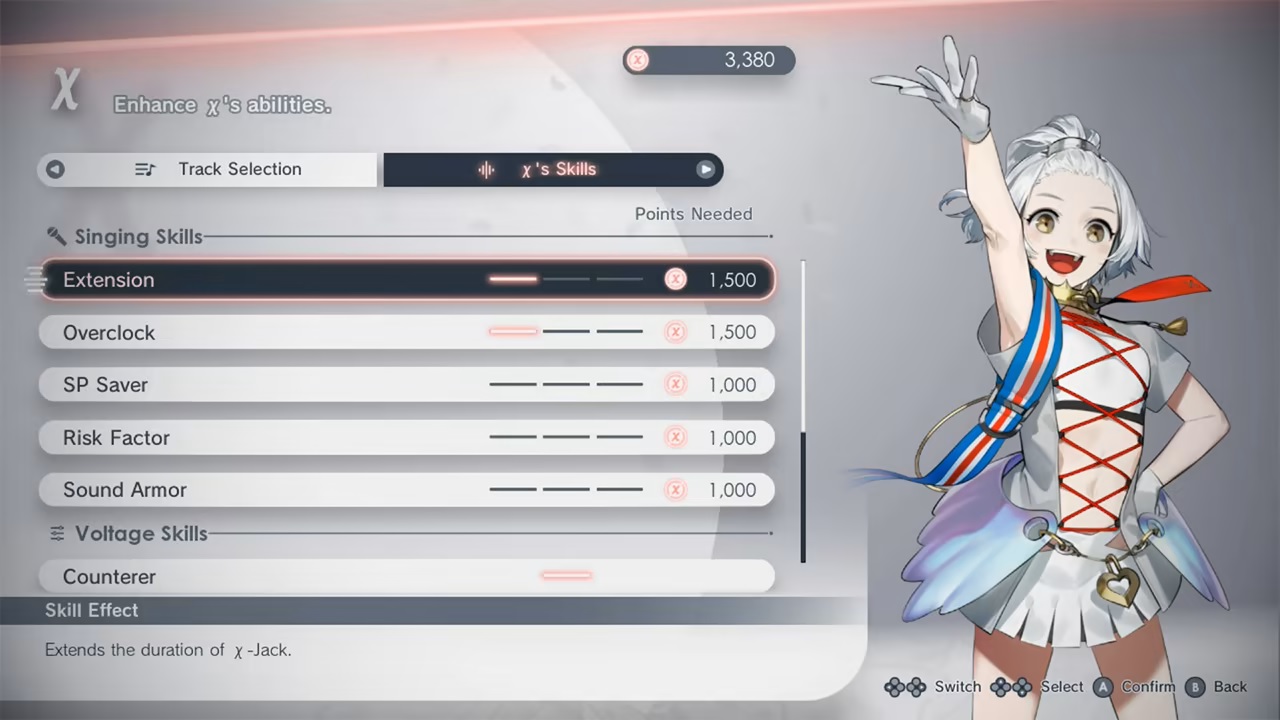 Another exciting aspect is that every party member feels like a welcome addition and, whenever a new one comes into the story and party, mixes it up in a really fun way. It’s cool being able to use your tank to do an AOE attack and launch folks up into the air, while your ranged character keeps them up in the air by launching projectiles, followed by a DPS then slamming down the enemy for huge amounts of damage if you play your cards right. Because of its Imaginary Chain system, you can also decide when your party’s moves actually come into play by sliding the timer to choose when you actually want them to attack, giving the turn-based RPG a more flexible flavoring instead of the usual “you go, I go”. Everything about The Caligula Effect’s battle system is really what makes the game shine the most outside of its atypical dungeons and hub worlds that can be traveled to and from via your VirtuaDoll’s train, The X Express, which will also serve as a sort of headquarters where you can manage your team but also participate in Character Quests specifically tied to each member of the Go-Home Club.

Because this is a world driven by music too though, it’s worth mentioning that a lot of music will be played in the background that certainly wants you to listen to it. So much so, X also has a Voltage meter that once filled can allow her to do performances that enhance all party’s abilities called X-Jacking. Throughout the game you’ll obtain new music that you can assign to X that she will perform that come with a variety of buffs and passives that you can toggle between at any time outside of battle, which makes for a nice sort of jukebox that you’re the DJ of, but one that’s much more alive. Much like its predecessor, a lot of love and care went into the types of music in The Caligula Effect 2, and it becomes a core part of its gameplay not much different from that of Tokyo Mirage Sessions #FE. 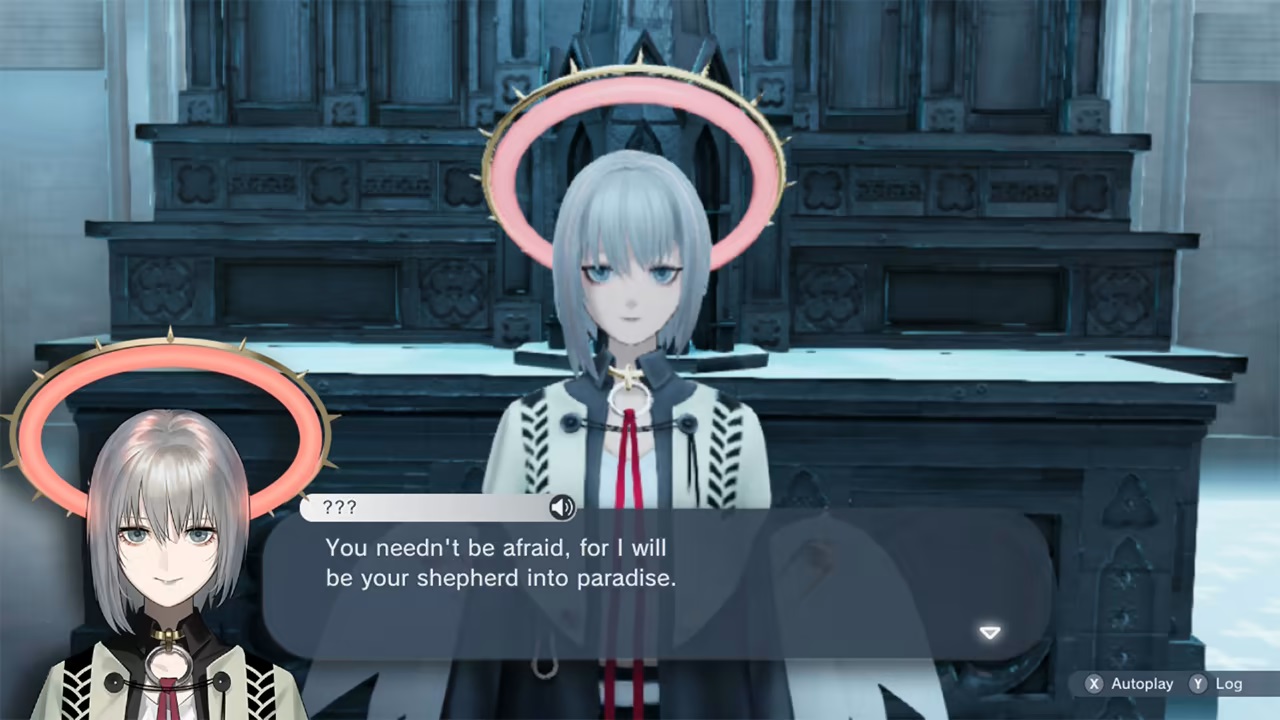 The Caligula Effect 2 has a lot of forward-thinking ideas, much like its predecessor, that make it a refreshing yet familiar take on JRPGs. It should be mentioned though for all it does right this time around in the actual gameplay department having refined just about every aspect of its systems and even one-upping itself by having an even more gorgeous HUD and UI system than The Caligula Effect: Overdose, The Caligula Effect 2 still very much looks and acts like a PS Vita title where the series made its debut. The Caligula Effect 2 had it is chance to shine and do something different graphically (not aesthetically, which is fine) and yet it still echoes that of legacy hardware, especially on Switch.

While playing on a TV or in handheld mode, The Caligula Effect 2 looks especially muddy and blurry just like Overdose did and is extremely modest with its polygon distribution. While it’s mostly stable and doesn’t suffer as many severe frame drops as it did with its original or Overdose predecessors, it can still chug on occasion when battles or environments get especially busy. The character art in menus and dialogue exchanges are still of a high quality, but the difference in sharpness is immediately noticeable when just about every backdrop is riddled by a poor resolution, jagged edges, and an egregious draw distance. On the Switch Lite, The Caligula Effect 2 feels much more at home and doesn’t look anywhere near as dated on its smaller screen, giving off vibes of the rather crisp look of the original game where it was natively built for the PS Vita. Having said all of that, even for its somewhat poor performance, low resolution, and lack of optimization, for those that want another JRPG that they’ll mainly use as a portable experience, The Caligula Effect 2 is a solid choice so long as you’re able to forgive its technical and graphical woes.

The Caligula Effect 2 does a great job at taking what made the original Caligula Effect (and Overdose) an exciting new property from the minds of Persona and expands on that while filtering out a lot of the unnecessary bloat and nonsensical mess that unfortunately plagued its predecessor. With an engrossing story, deep party management systems, and immersive dungeons shaped like various parts of Japan and virtual spaces, The Caligula Effect 2 is a rather fantastic new JRPG for the Switch that will give tons of hours to get lost in and explore as you fight more musicians in the new world of Redo. A lot of what The Caligula Effect 2 also does almost feels like it’s trying to make up for the mistakes of the first with how certain things are named (like the obvious Redo world), but its biggest drawback – though certainly not a deal breaker – is its dated graphics that are further hindered by the poor resolution and lack of fluidity on the Switch version of the game. Yet despite some technical shortcomings, The Caligula Effect 2 is a formidable JRPG that feels both classic and contemporary, introducing fresh ideas in a refreshing virtual world where its music is just as great as its gameplay.

The Caligula Effect 2 copy provided by the publisher for the purposes of this review.