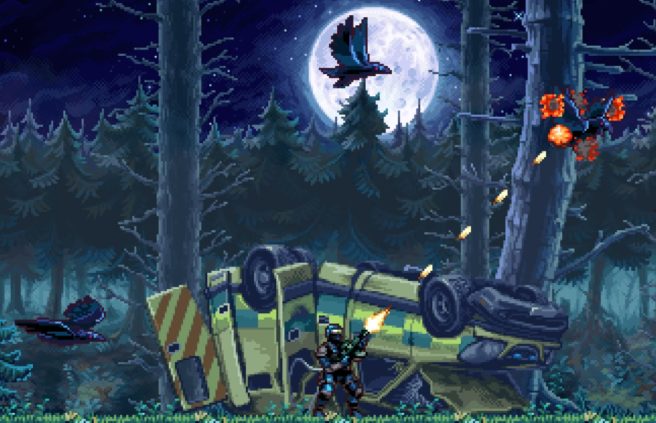 Following up on the new teaser trailer today, Polygon has a bunch of details about The Mummy Demastered for Switch. The site was able to speak with developer WayForward about the project.

Here’s a roundup of information from the article:

– Out this fall
– Universal were a fan of the 2D, pixel-style look
– Sort of a spiritual sequel to Aliens: Infestation on DS
– Play as an agent for the Prodigium
– Prodigium is going to be a unifying element through all the films
– They’ve existed for centuries and are following monsters, trying to keep track of them and keep evil at bay
– In this game, the Prodigium have to go head to head with the monsters under Ahmanet’s control
– Anonymous Prodigium agents replace the standard video game concept of lives or continues
– When you fall in battle, Prodigium sends another generic agent to replace the lost fighter
– The game doesn’t limit the number of continues available to you
– Punishment for failure: Your fallen comrade becomes corrupted by Ahmanet and joins the armies of the undead, meaning you’ll be forced to destroy him
– The newly zombified hero literally is you, and possesses all the skills and upgrades your avatar did upon dying
– Can carry two additional weapons at a time
– If you die while carrying them, if you want those weapons again, you need to hunt down your undead self and retrieve them
– Halo-inspired arms system that allows you to carry a limited selection of the weapons and subweapons you’ve collected at any given time
– Swap weapons by finding one of the arms depots scattered around the map and change your loadout
– Undead agents are the most challenging enemy type in the game
– Originally, when you died, they would raise from the dead and wait for you, no matter how inconvenient
– They had the full power of your upgrades and ammo, plus their HP was based on how many health packs you were carrying
– Undead agents were changed to be more manageable by paring down the health of the undead agents, but keeping them equipped with your former weapons so that you feel like you’re taking on your former self
– Loose connection to the film
– The only actor to appear in-game is the pixel sprite of Sophia Boutella’s Princess Ahmanet
– Game plays very much like a real-world take on Metroid
– The Prodigium agents use many of the same rules as Samus
– 100-point health upgrades
– Secondary weapons can blast through armored doors
– Recognizable hooks for players to return to once they’ve upgraded their capabilities
– Game world has Castlevania vibes
– Starts in the moonlight-soaked gothic architecture of London
– Pathways to several subterranean areas open once you beat the first boss
– First boss is a giant spider
– Ravens, bats, skeletons, etc. are enemies
– Ravens rise from their perch as you draw near, then swoop down to attack
– Skeletons toss bones in a looping arc
– The bats flutter back and forth while spitting fireballs
– Team wanted to take pieces of Castlevania, Metroid, Contra