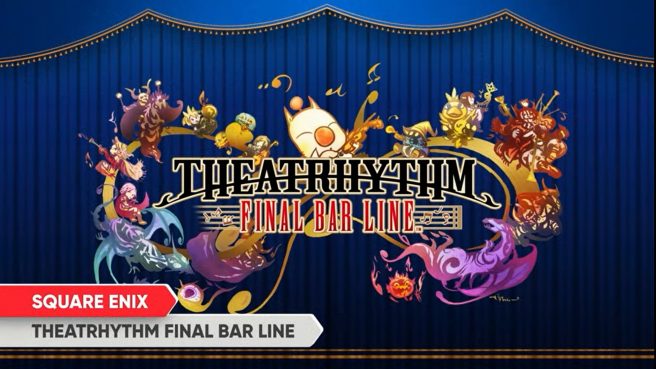 The music of FINAL FANTASY comes together here
Includes popular tracks from a total of 46 different games, featuring the latest music from FFI through to FFXV in the main series, as well as remakes, spin-offs and various different soundtrack CDs.
Relive the thrilling battles and soaring emotions alongside beautiful music and video.

Throw yourself into the rhythm
Push the buttons in time with the music to match triggers moving across the screen on 3 different types of stage. With easy to learn controls and four different difficulty settings, anyone can jump in and have fun straight away.
Also supports controller sharing play using a Joy-Con controller.

Online multiplayer for up to 8 players
Introducing riotous online Multi Battles where everyone plays together! Interfere with the other players plans and make clever use of your Burst abilities to turn the tables and grasp victory.
Don’t forget to exchange ProfiCards once the battle is over!

Put together the party of your dreams with a total of 104 characters to choose from.
Meet cute versions of many classic characters and monsters from the series as exciting RPG battles play out alongside the rhythm action. Gather and power up your team to beat the next stage.

Enjoy the music and video at your leisure
The game also features music player and theatre modes that let you sit back and enjoy the tracks and movies you have collected without the rhythm game action.

Find the first trailer below.

Theatrhythm Final Bar Line will be sold on Switch for $49.99.