THQ Nordic announces Sphinx and the Cursed Mummy, The Book of Unwritten Tales 2, and The Raven Remastered for Switch 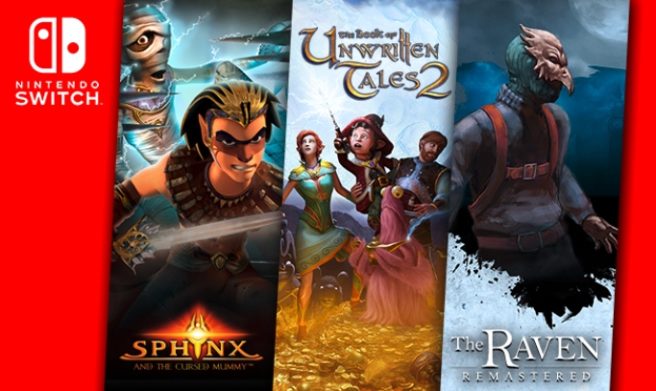 THQ Nordic announced a trio of titles for Switch today. Sphinx and the Cursed Mummy, The Book of Unwritten Tales 2, and The Raven Remastered are all slated for early 2019.

Here’s information about each game:

Sphinx and The Cursed Mummy

Sphinx and The Cursed Mummy is an original 3rd person action-adventure inspired by the mythology of ancient Egypt. Travelling the world via magical portals to foil the evil plans of Set. Sphinx’s Journey will require all his wits, agility, and special powers. He will also rely on his reluctant hero friend, The Mummy, to help when being inconspicuous is the only solution. By finding the stolen magical crowns of Egypt, Sphinx can stop Set and save the world.

– Use Sphinx’s skill with weapons to face deadly mythical monsters — and transform to a winged lion
– Take control the Mummy when strength & combat skills aren’t needed — use Mummy’s stealth abilities to avoid enemies
– Interact with hundreds of unique and imaginative creatures, enemies and allies
– Fantastic graphics bring this mythical world based on Egyptian legends to life

The Book of Unwritten Tales 2

In The Book of Unwritten Tales 2 the player controls four different characters in a lovingly created fantasy world, and must solve some tricky logic puzzles in classic point-and-click style. The thrilling story and the usual BoUT humour with its numerous nods to fantasy elements and colourful characters guarantee over 20 hours of fun gameplay.
Epic fantasy story with over 20 hours of gameplay

– Classic BoUT humour packed with references to Lord of the Rings, The Hobbit, Harry Potter, Discworld, Game of Thrones or World of WarCraft to name a few
– Hundreds of crazy, surprisingly logical puzzles
– Four playable heroes. One of them is pink.
– Projection-mapping technology combines the great features of 2D and 3D
– Orchestral soundtrack with all the classic and many new works

London, 1964. An ancient ruby is stolen from the British Museum. At the crime scene: a raven feather. Is somebody trying to follow in the footsteps of The Raven, the legendary master thief who disappeared years before?

Constable Anton Jakob Zellner finds himself in the middle of the kind of murder mystery he so far only knew from reading his favourite crime novels. Nothing is what it seems. Everyone has something to hide. And the Raven is always one step ahead…

– A classic whodunit adventure from KING Art, the creators of the Book of Unwritten Tales-series
– Experience a thrilling crime story through the eyes of multiple characters
– Classic murder mystery locations, from a train in the Swiss alps, to a majestic cruise ship and the Cairo Museum
– High quality voice acting from a compelling cast of quirky characters
– Fully remastered animations, lighting and hair in full HD resolution

More: and The Raven Remastered, Sphinx and the Cursed Mummy, The Book of Unwritten Tales 2, THQ Nordic, top