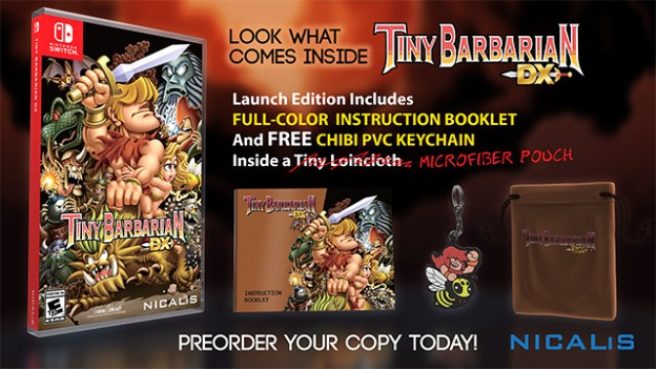 Tiny Barbarian DX is coming to Switch on October 10, Nicalis announced today. The game will be sold physically and digitally for $29.99.

Here’s an overview and a couple of comments from developer StarQuail Games:

A tremendously satisfying platform-jumping/sword-swinging 2-D adventure from developer StarQuail Games, Tiny Barbarian DX is easy to learn and hard to master. “I’m not saying I hate tutorials in video games,” says designer Michael Stearns, “but this game starts out by telling you the functions of two buttons and then sets you on a mountain surrounded by enemies where you will surely die.”

The presentation may be pixel-art perfection, but Tiny Barbarian DX is not afraid to take a few liberties with the retro-gaming aesthetic. You might see the occasional transparency effect or hear more instruments in the soundtrack than you probably remember from your old 16-bit game cartridges…and the super-widescreen aspect ratio is an obvious concession to modern displays. But it’s all done with great taste and supreme reverence for the games that paved the way—some of which are directly referenced in the level designs or gameplay.

As previously announced, initial copies of the physical version will have several bonuses. These include a full-color instruction booklet and a PVC keychain of the Tiny Barbarian in a microfiber pouch branded with the game’s logo. The boxart was also drawn by Susumu Matsushita, who is the artist behind tons of Famitsu covers.

View a trailer for Tiny Barbarian DX below.