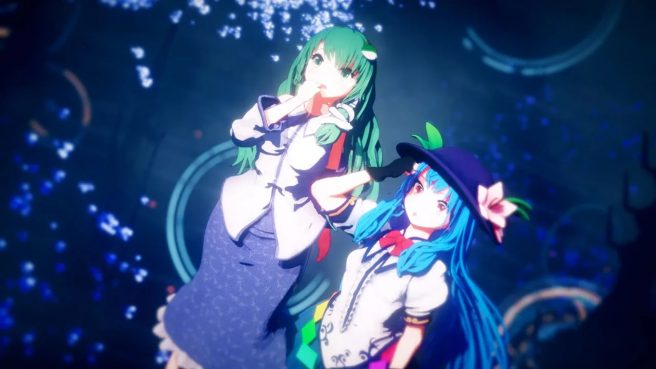 Thanks to Phoenixx and Aqua Style, Touhou Genso Wanderer: Lotus Labyrinth R released on Switch this week and we have quite a bit of gameplay. The new video clocks in at just over a half hour, offering up a lengthy look at the title.

Venture into dungeons with a huge party of your favorite Touhou characters!

Now you can bring dozens of partners with you on your dungeon crawls, in addition to other quality of life improvements that make the game’s systems and controls smoother than ever.
Overwhelm your enemies with strength in numbers!

Lead tons of your favorite Touhou characters at once and conquer the impregnable Lotus Labyrinth!

Oversized Party System – If you can’t hack it alone, bring the whole gang!
Prior Genso Wanderer games restricted the player to exploring alone, or with a single partner, but no longer! This game lets you bring in tons of partners all at once.
Bring in everybody you’ve recruited! Or just bring in the characters you like! Blaze your way through dungeons with the power of friendship and overwhelming numbers!

Oversized Party Formation System – Form teams and bring them all in to conquer dungeons!
In addition to the usual main party led by the player, you can assign your partners to entire other teams with their own leaders, which can then act separately.
You can create optimal party comps, or you can throw all that out the window and make gimmick teams like the Scarlet Devil Mansion Team, the Green Hair Team, the Little Sister Team, or whatever else you feel like!

Partner Skill System – Master various skills, share them with partners, and power them up!
In this game, partner abilities grow stronger with Skill items.
Raise your partners’ ranks and bring out their latent abilities!
You can also assign skills by team!
Customize and set skills to suit your own style of play!

Mega Variety Equipment System – Load up on tons of weapons and armor!
In a departure from prior Genso Wanderer titles, you can now equip up to 10 separate weapons, 10 separate pieces of armor, and 10 separate charms, all at the same time!
And this equipment strengthens more than just the player. All of your party members benefit from it!
Select an equipment loadout that accounts for all of your partners’ traits and weaknesses, not just your main character’s!

If you’re interested in Touhou Genso Wanderer: Lotus Labyrinth R, you can pick it up now from the Switch eShop. English, Japanese, and Chinese language options are supported.