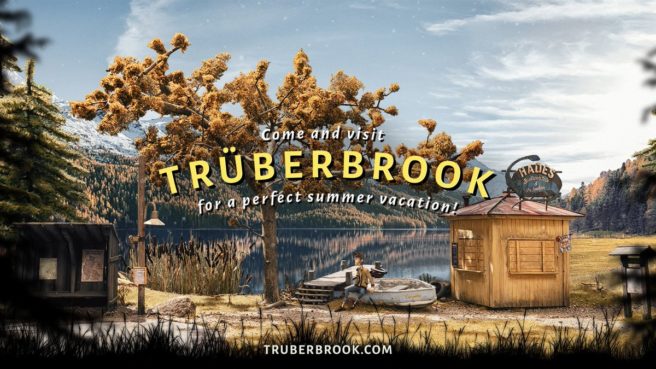 Headup Games and btf today announced the release date for Truberbrook. The adventure game is due out digitally on April 17, with the physical version to follow on April 19.

Coinciding with today’s news, Headup shared some information on the game’s hand-crafted scenery and visuals. Here’s the full rundown:

One of Trüberbrook’s most distinctive features is its unique visual style. The sceneries are purely handmade – ‘handmade’ as in: ‘Manufactured using real hands!’ And fingers. And glue. Look at what the developers made, piece by piece, by the sweat of our brows. Every little detail is custom-made:

The models were digitized using a technique called photogrammetry and later simplified for real-time rendering. Every scene got an individual treatment and was staged with actual physical lighting. This allowed the developers to simulate different hours of the day or weather conditions. Even a change of seasons were possible just by redecorating those sets, for example with real tiny little snowflakes — no joke!

Every variation of the miniature models was photographed and got re-projected onto the digital model. Using various compositing workflows, the characters were integrated into the scenery with digital lighting and real-time shadows. This way, highly detailed low poly models developed that blend perfectly with the digital characters. Each level was finalized by adding effects like light reflections, particle effects and depth of field.

And some information on the game in general:

Trüberbrook is a thrilling mystery-sci-fi adventure game. Enjoy an adventurous vacation to a 1960’s parallel universe! A Sci-Fi-Mystery Adventure Game with handmade scenery.

Imagine yourself on a vacation to Europe in the late sixties. Now, picture yourself as a young American scientist; Hans Tannhauser. Yes, that’s your name in this scenario. While you’re at it, think of Trüberbrook, a remote village in rural, mountain-sloped and densely forested cold-war Germany. Because, that’s where you somehow end up after hitting the continent. But who cares, you won the trip in a lottery! Or at least, that’s how it seems. But don’t fear, instead of getting some rest, you could find yourself having to save the world…