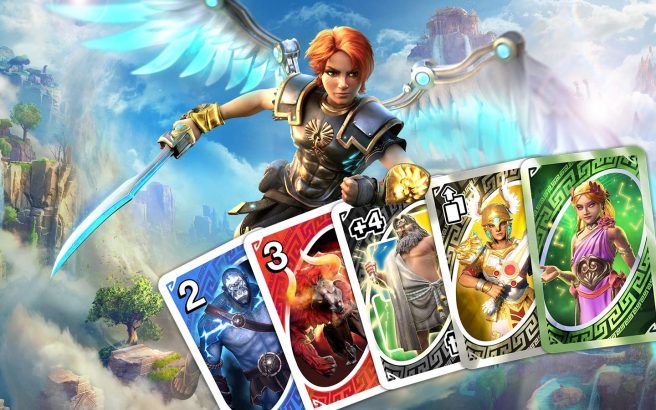 Ubisoft today revealed new content for Uno based on Immortals Fenyx Rising. The DLC, titled Fenyx’s Quest, is out now on Switch.

Here’s a proper rundown of the DLC, along with a trailer:

Today, Ubisoft announced that Fenyx’s Quest, the newest DLC for the UNO console game, is now available. Inspired by Immortals Fenyx Rising, an exciting new IP featuring the winged demigod Fenyx on a quest to save the Greek gods, the Fenyx’s Quest DLC will add a fantastical twist to the classic UNO experience with new features based on the most iconic elements of the Golden Isle.

With Fenyx’s Quest, players can experience the UNO game in an immersive environment featuring a vibrant Golden Isle-inspired board, exclusive themed-cards, and the Immortals Fenyx Rising soundtrack. Players can fulfill Fenyx’s Quest to free the Gods and beat Typhon’s Curse. At the beginning of each game, players will be given one of 4 cursed Gods to free and be granted their God’s powerful blessing as a passive effect:

Aphrodite: Become immune to all damage from Typhon.
Hephaistos: For every three cards played, discard all cards of a specific color.
Athena: When opponent draws a card after not having a match, discard a random card.
Ares: Each time a card is played, two random cards of the same color are discarded.

Fenyx’s Quest can be purchased for $4.99. It’s also included in Uno Ultimate Edition, a $19.99 package containing all DLC for the game.