WarioWare: Get It Together! modes detailed 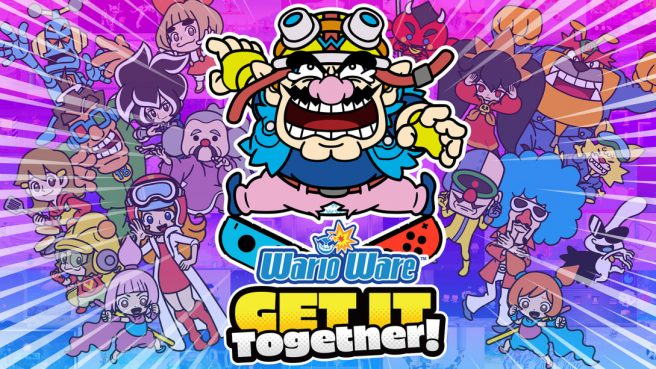 Game Informer recently went hands-on with a near-final build of WarioWare: Get It Together!, providing various details about the Switch game. The site’s preview outlines various modes that will be included.

– Story, Variety Pack, Play-o-pedia, Wario Cup, Crew, Missions, and Local Wireless options
– Story: follow Wario and his crew after they release their latest game
– Something goes wrong, and they all get sucked into their own game
– Encounter different characters from Wario’s team as they play through the game’s themes
– Ex: Dribble and Spitz’s theme is fantasy
– When you enter Story mode, you select a character to play as, plus a party of characters
– Depending on the theme, you get the opportunity to use this party in certain circumstances
– Once you start going through a Story sequence, it’s the same WarioWare players know and love
– The game throws tons of bite-sized microgames at you with minimal time to react to the instructions that flash on the screen, figure out how to play the microgame, and complete the objective
– If you’re playing cooperatively, you have to know which character you’re controlling, how that specific character controls, and how to best use your character’s specific abilities to solve the microgame
– In one game, players have to lure an octopus into a cage, then close the door behind it, while in another, the players need to give a floating plant man a high-five
– The Story section culminates with a boss stage
– Boss example: protect a character from tentacles long enough to earn a key, then use the key to open the gate and push the character into the escape area
– More than 200 microgames included
– Variety Pack: hub for party-style minigames
– These games operate as longer-form explorations of WarioWare: Get It Together’s mechanics
– Daily Grind, which supports one to four players, lets you traverse through side-scrolling stages with obstacles, enemies, and collectibles using the game’s various characters
– Each time you get a power-up, you change to a new character, keeping the experience fresh and earning bonus points
– Because the characters have unique abilities, you never know what you will get when you swap to a new one
– Ex: Dribble can blast enemies so they don’t hit him while Dr. Crygor can swim and charge through the air
– If one player gets KO’d, they don’t finish the day or deposit their points, but they respawn at the start of the next level
– Puck ‘er Up is another Variety Pack game
– Puck ‘er Up is made for 2-4 players
– It’s is a twisted version of air hockey that incorporates WarioWare’s microgames each time someone scores
– If you manage to get the puck in a goal using your character’s abilities and moves, you are transported into a microgame while the other players do their best to disrupt you from outside the game
– Though the scoring player is the only one in the microgame, the other players can attack the smaller screen you’re on by shaking, rotating, or squishing it
– Play-o-pedia: access information on all the microgames you’ve encountered
– Also get hints on where to go to find new ones here
– Can also replay them in rapid-fire fashion
– High Tech: microgame where the two players must navigate a short platforming maze to reach the roof and escape in a helicopter
– When you choose your character, the game tells you how suited for that specific microgame the character’s abilities are
– Once you enter the mode, you repeatedly play the same microgame to see how fast and difficult the game can get before failing
– Crew: see and interact with all the characters on the WarioWare roster
– Can enter practice courses with each character to better learn their movements and abilities and customize your favorites with cosmetic colors
– Can gift presents in this mode as well
– These are purchased using earned Wario Coins
– If you give the right character a present they like, they can become more powerful
– Wario Cup: play competitively to get the highest score possible, then upload your highest score to a leaderboard via a ranked mode
– Once in the leaderboard, you can compare your score globally or against friends
– Missions are another way to earn Wario Coins

WarioWare: Get It Together! is due out for Switch on September 10.

More: Intelligent Systems, WarioWare: Get It Together!