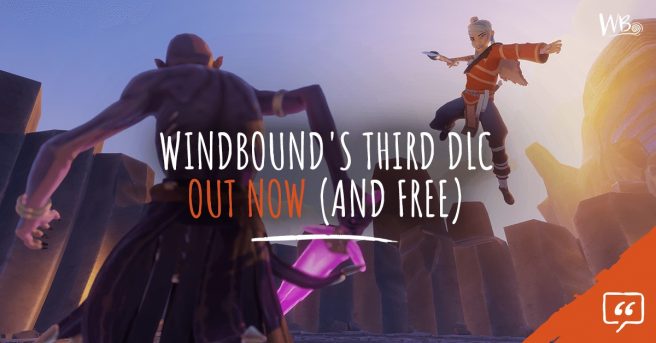 The next major update for Windbound has gone live. There are plenty of new features and content to check out, including The Loathing, Forsaken Enemies, new melee combat moves, new items, and new Challenge Towers.

Kara’s return to the Forbidden Islands has stirred a long-forgotten undead enemy to life… erm… unlife! And where these new Forsaken foes have risen, a supernatural malevolence has bubbled out of the earth, seeping into the sea, tainting the land and corrupting the local wildlife – the Loathing.

Should Kara spend too long in the presence of the Loathing, shetoo will become blighted, suffering from diminishing health until she is overwhelmed. Thankfully, the edible blooms that dot the isles can stave off the full effects of the Loathing, and they can even be combined to create more potent potions and other useful artefacts.

On the islands corrupted by the Loathing, Kara will encounter a variety of fearsome enemies from the time of her ancestors. Some may even bar her progress to The Crossing.

As Kara progresses on her journey, she’ll have the opportunity to learn some new combat moves.

As her journey continues, Kara may find the ancient recipe for a selection of Runes to enhance her abilities whilst she carries them.

As Kara learns new melee combat moves, she may also learn how to craft Ancestral Masks to amplify her combat abilities.

But it will take a herculean effort to obtain the ultimate Ancestral Mask – Inara will not give it up without a fight.