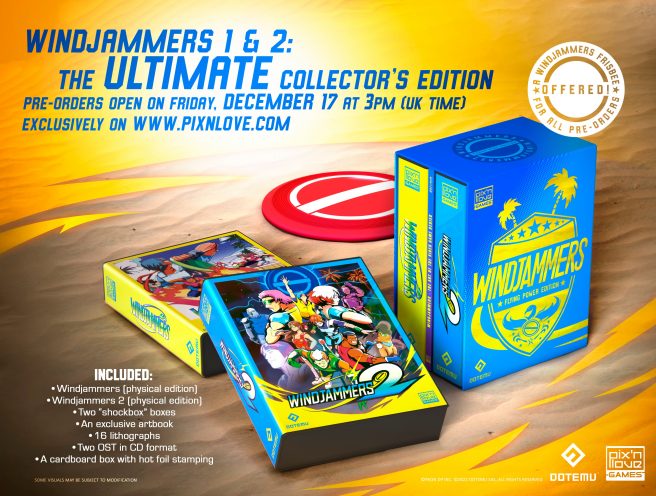 Coming fresh off the heels of the announcement of Windjammers 2’s release date, the people at Pix’n Love Publishing and developer DotEmu have announced that both Windjammers and Windjammers 2 will be getting a physical release on Switch in the form of the Windjammers Ultimate Collector’s Edition.

If you’d like to learn more about what this series is all about, here’s more info on them according to Nintendo:

Windjammers is a fast-paced head-to-head arcade game where two players face off on a court, and throw discs at the opponent’s goal zone to score points. Incredibly fun and intensely addictive, Windjammers is the adrenaline rush you’re looking for!

● Online Versus: for the first time ever, face other players worldwide in ranked matches and compete in the top leagues!

Originally released on the NEOGEO system, Windjammers perfectly blends sports and fighting games. Sharpen your throwing and sliding skills, use the best techniques to defeat your opponents, and become the world’s best player!

Windjammers is available to download on the Switch eShop and Windjammers 2 is set to release on January 20th, 2022. Pre-orders for the Ultimate Collector’s Edition open up on Friday, December 17th at 3pm British time, 10am Eastern, 7am Pacific. You can get yours here.