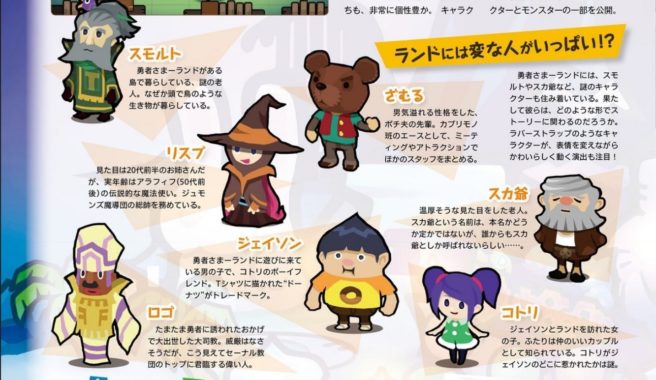 Work x Work is featured in this week’s issue of Famitsu with a new batch of details. We learn a bit about the staff room, new characters, and DLC plans.

Here’s the roundup, courtesy of Siliconera:

– In the staff room, the monster characters talk about what order they will come out, what sort of moves they should be defeated by, and more, all so that guests can have a good time
– Pochio will be able to talk to the various enemy characters, listen in on their meetings, get hints on how to instruct the guests during their adventure in Hero-sama Land
– Smolt: mysterious old man who lives on the island, has a bird living on his head
– Zamuru: teddy bear-like staff member who’s Pochio’s senior
– Zamuru manages the staff who act as enemies in Hero-sama Land
– Lisp: legendary witch who is around 50 but looks half the age; in charge of the Summons Magic Corps
– Jason and Kotori: young couple who have come to visit Hero-sama Land; while they seem close, no one seems to know why Kotori likes Jason
– Logo: priestess who just happened to be invited to join the Hero, and so became famous
– Logo doesn’t command respect, but holds a lot of influence despite how he looks and acts
– Suka-jii: kindly-looking old man that nobody knows the real name of
– In order to extend playtime after launch, the team plans on adding new characters and stories in sets in order to expand the worldview
– New extra stories for existing characters in order to flesh them out even more
– Work x Work may have a crossover DLC with Caligula, with Mu and Aria being guests at Hero-sama Land