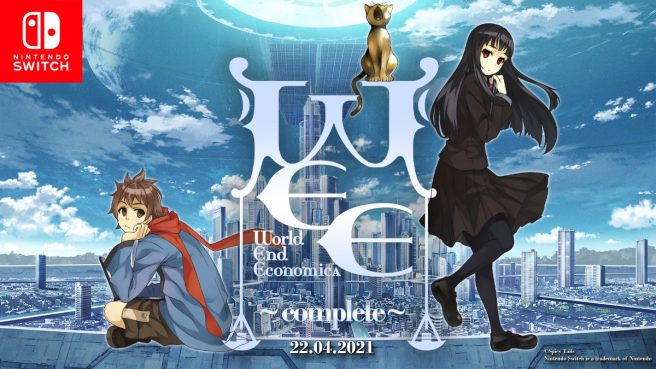 After it was announced for Switch in 2019, World End Economica: Complete has been dated for Switch. The three-part visual novel is expected digitally on April 22.

From the author of Spice and Wolf, Isuna Hasekura, comes World End Economica, a three-part visual novel set in the far future on the moon, 16 years after humans have begun to colonize it. A young boy named Haru has been chasing his wildest dream. His dream is to stand where no man has stood before, and in order to do so, he needs capital, a ludicrous amount of capital.

In this brand new port for the Nintendo Switch, all 3 episodes are collected into one single package, giving you the -complete- experience of Haru’s journey through the sinister world of economics and intrigue. Enjoy the rich and fully illustrated scenarios with breathtaking visual appeal and some truly awesome music, with theme songs courtesy of popular J-rock sensation Kishida Kyoudan & The Akeboshi Rockets, known for the opening songs for High School of the Dead and Strike the Blood.

World End Economica -complete- comes to Nintendo Switch WORLDWIDE on 22.04.2021, so mark the calendar and gaze towards the stars as the moon becomes your next destination. Enjoy countless hours of one of the visual novels’ finest examples.