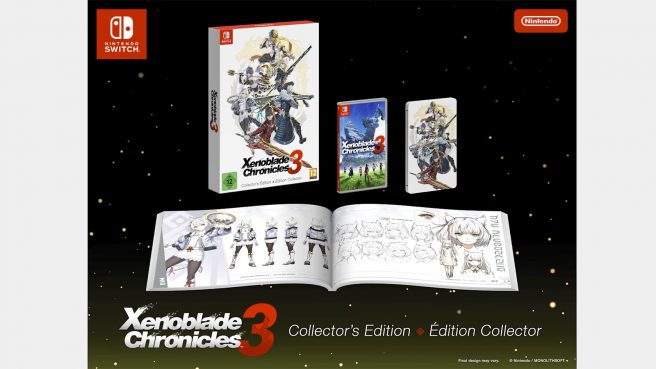 Original (5/15): According to the official UK My Nintendo Store site, the bonus items included with the Xenoblade Chronicles 3 Collector’s Edition won’t be arriving in Europe until this fall.

Nintendo intends to ship the game at release. However, all of the other extras will be provided separately later on. Thankfully, shipping will be free.

The Xenoblade Chronicles 3 Collector’s Edition includes package artwork from Masatsugu Saito, a full-color concept art book with over 250 pages, and a steel case for the game card. Thus far pre-orders have yet to open.

Xenoblade Chronicles 3 launches for Switch on July 29, 2022. Let us know if you’ll be trying to secure the RPG’s collector’s edition in the comments below.

Update (6/8): Unsurprisingly, it’s now been confirmed that the Xenoblade Chronicles 3 Special Edition extras won’t ship until the fall in North America. Fans will only receive the physical game first for the July 29 launch. The other items will be released separately later.