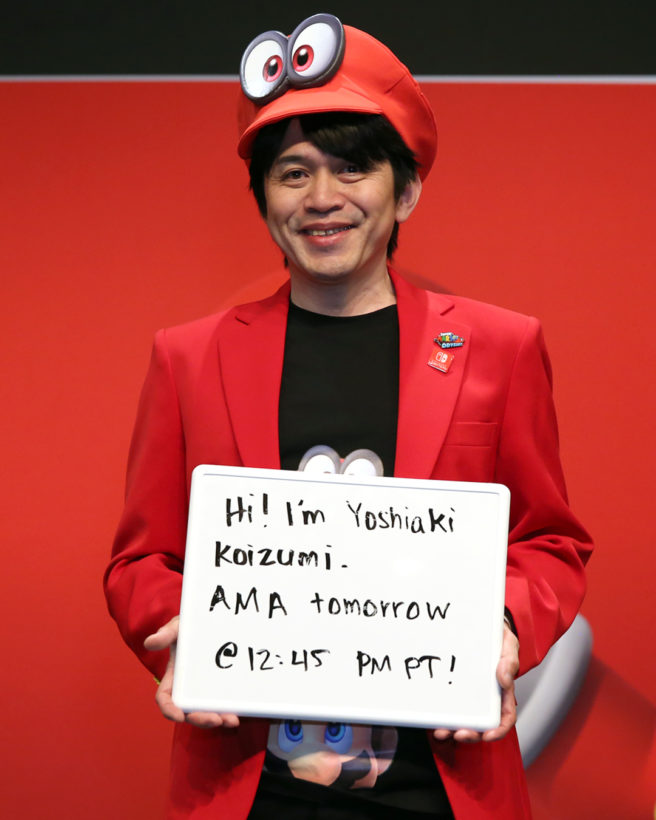 Update: Bumped to the top. It’s now over – we have almost everything below.

Yoshiaki Koizumi, the producer of Super Mario Odyssey, has just started a special AMA on Reddit. He’ll surely be inundated with questions, but you can nonetheless try your luck at having your question answered.

The AMA can be found here. We’ll add in any interesting responses throughout the hour-long session below.

Of all the things Mario can take control of in Odyssey, which is your favourite?

Is Koichi Hayashida involved in the development of Mario Odyssey?

How did you come up with the mechanic of Mario possessing enemies and objects?

So when we wanted to create Mario games this time around we wanted to focus on the actions Mario can do and in previous Mario games he was able to get power-ups and new abilities. But this time around when we were making many different prototypes and changed our approach that found capturing or “possessing” enemies worked well so we stuck with that.

What’s your favorite hobby outside of video games?

How many ice cubes are in your joycon right now?

What is your favourite Switch game so far, Mr Koizumi?

It’s hard to answer that as the producer of all the software, I love all of them!

How did you get into game design? What interested you about working for Nintendo?

I wasn’t always a game developer, I actually stated out as an artist, and did images that are in manuals. One day I had a manual that didn’t have instructions for what should be in it so I went to check with the development team and next think I knew I was working on a Zelda game.

What do you enjoy most about making awesome video games? Is it the process of making a game or seeing people’s reactions?

They are both really fun, but in terms of how we view it they’re not seperate. You have to look at how people see your games.

Mr. Koizumi, what was the inspiration for choosing a modern city environment as one of the kingdoms in Mario Odyssey?

The city was one of many experiments when we were first making the game, and it was very interesting. Especially with how strange it looks to have Mario exploring the city environment.

What’s the best part of your job?

One of the biggest is working on the characters that appear in games, knowing how players will identify with them, and thinking of things like how high will they jump, how quickly will they walk, and thinking about what would be the most appropriate in each case.

What drew you into bringing Pauline back into a mainstream Mario game after all these years? We’ve missed her! Where has she been? Was she too busy working with the Mario Minis?

When we were deciding which Kingdoms to have in the game, we knew we wanted the city environment, and we wanted something that would have resonance with players. We knew that players know Pauline so we of course wanted to make her the mayor of New Donk City.

It’s important to note that thought they are called Kingdoms, they do not necessarily have royalty, and that’s why she’s the mayor.

What is your favorite world in the game?

I think that would have to be New Donk City for me.

what will the use of amiibos in Super Mario Odyssey ?

Everytime you tap an amiibo you’ll receive a costume and in-game assistance.

I love the HD rumble in games like Mario kart 8 deluxe. Will Mario Odyssey have HD rumble??

We’re working on lots of different HD Rumble integration, but on the showfloor players can feel the scooters rumble when you’re driving that.

Where did the inspiration come from to make the hat a character?

One of the reasons for making the hat into a character is that it gave us the opportunity to give people an attachment for somthing that’s personal for us. You can talk to and experience your journey with Cappie, similar to Na’vi in Legend of Zelda: Ocarina of Time and making this character relatable was important to us.

Mr Koizumi would you rather fight 1 horse sized duck or 100 duck sized horses?

Horse sized duck. It looks really cute, and maybe if I feed it, it will let me ride it.

Is there some kind of (friendly) rivalry between the Super Mario team and Zelda team? And especially between you and Mr. Aonuma, since you used to work together and both of you inherited the biggest creations from Shigeru Miyamoto?

Because I am responsible for both the Mario and Zelda teams, I don’t feel a sense of rivalry. As far as Mr. Aonuma, we don’t have a rivalry at all. I’m very happy with what he’s doing and I hope he continues working hard.

Mr. Koizumi, I read here that you’ve been practicing your pour-over-coffee techniques.

I’m very particular about my coffee. I buy my beans, I grind them. I weigh the grounds and measures the volume of water. The water cannot be too hot unless the coffee will become bitter, so I like to pour over using a long stemmed pouring kettle. It has to have a long, narrow pouring spout or too much water will come out at once.
The whole thing has become a ritual for me, I really enjoy the good smell of the coffee as I make it.

Which has been your favorite Zelda game to work on?

Ocarina of Time. It was a lot of fun to work on, and perhaps the reason it stayed with me is that we had to start from zero to make that game.

What was the most exciting moment of your career and what made it so memorable?

Each release of a game that I have worked on has been really exciting for me. I always try to take note of people’s reactions. In the time before social media, I used to go to game shops directly so I could see people’s reactions when a game hits their hands.

What has been the biggest challenge in developing Super Mario Odyssey?

Biggest challenge has been that since it’s 15 years since the last time we made a sandbox style Mario game, it felt completely different and new to come up with ideas that would work there. We had a lot of debate to decide if people would accept this kind of playstyle again. That was probably the biggest challenge for us.

What is Mario’s favourite vegetable?

Is a mushroom a vegetable? If not that, then I suppose it would be a turnip.

As we were developing Pauline more as a character, we know that she was going to be interested in jazz. It was interesting for us to have the first song in a Mario game with vocals. Have you guys been finding yourself singing it?

Mr. Koizumi. Do you think that a hot dog counts as a sandwich?

A Hot Dog is not a sandwich.

Probably my own Mii.

What advice would you give to someone who wants to get into video games design?

I think one of the best things that you can do would be to expose yourself to other kinds of play, not just video games. It will give you a well rounded sense of the ideas that go around the concept of play.

Do you have any pets?

I really want pets, but I don’t have any right now.

Mr. Koizumi, what made you make Moons a collectible in Mario Odyssey?

Stars have had their chance, and we’ve grabbed Shines before, so i thought it was time we gave Moons a chance.

Hey, will we get to see the beloved brother Luigi in Mario Odyssey?

I hope you look forward to hearing more about that.

If you could throw your hat and posess anything in real life what would it be?

Since I’m already so good at doing my impressions of him, I would throw my hat at Shigeru Miyamoto. I would go around all day pretending to be him.

Koizumi-san how does the mobility of the Nintendo Switch affect the game design of Super Mario Oddysey?

I think this is also true of Legend of Zelda: Breath of the Wild, we wanted to make sure you could have a fun experience with the game even if you only had a short time to play. If you’re out on a journey of your own, handheld mode will help you play and have fun experience. Just be careful that you’re not too into playing and miss your bus stop.

What is your favorite amiibo Mr.Koizumi?

I think that would have to be Rosalina.