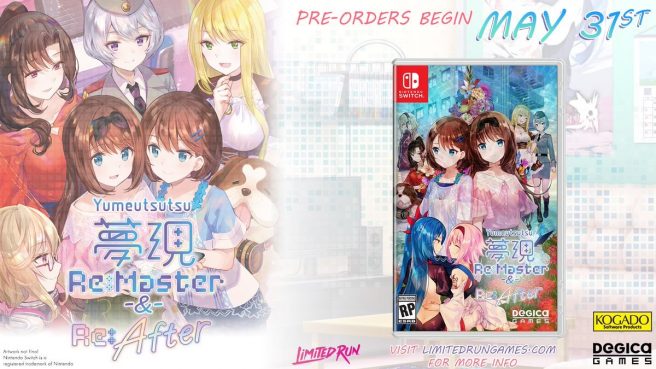 Both titles previously came to the console in April 2020. A physical version was offered in Asia with English support, but we never saw a boxed copy in North America or Europe. That changes now thanks to Limited Run Games.

Here are overviews of both titles:

The story is set in the town of Koenji, not far from the imperial capital of Tokyo, where a small game studio called Eureka Soft has set up shop.

The heroine Ai, a country girl, joins her sister Kokoro who works there, after receiving a mysterious email from studio head.

There she meets the quirky all-girl (and a dog) cast: the big sisterly head of the studio, her sister, giving her a cold shoulder, the maid/voice talent, the “tiny dinosaur” scenarist, the uniformed artist, and Banako, the dog and vice-president. Ai starts learning about game making as she slowly pieces together the mysteries of her colleagues.

Ai’s world will expand bit by bit, as the game production begins.

To answer the requests of the fans, here are five new stories of what happens After.

Deadline rather than paradise: Saki is now relaxed and planning a trip overseas with her lover when a call for help from the second game team comes in: “”Our scenarist went AWOL.”” What will Saki choose?

Ghosts of the Past: Nana, now a successful voice talent and happily wed to Ai, receives a letter from her long dead mother…

Married Life: Ai and Maria have moved out of the dorm and now live in their own house. But married life is fraught with its own challenges.

Love Story, With Her and the Dog: Ai decided Honoka looked best in her swimsuit, but she seemed so completely out of reach, until…

Pre-orders for the new physical version of Yumeutsutsu Re:Master and Yumeutsutsu Re:After open on May 31, 2022. Limited Run Games will have reservations on its website here.