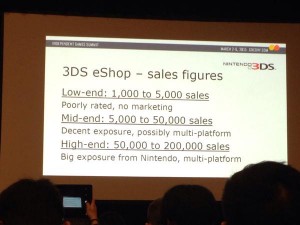 tinyBuild’s Mike Rose held a panel at GDC 2015 today titled “The Turning Tide: Independent Game Sales in 2015”. During the session, Rose touched on the performance of indie titles across a variety of platforms, including the eShop.

On Wii U, it seems that the lowest number developers can expect lies between 300 and 1,000 units. This would be a game that receives poor reviews, lacks marketing, or is exclusive to the platform. The best-case scenario allows games to see sales at around 60,000 copies, with most revenue coming from other platforms.

Rose also mentioned in his same talk that developers who ported their games to 3DS and received Japanese localization saw sales that exceeded expectations. Those who ported titles to Wii U via Unity felt it was worth it since the process was relatively easy.