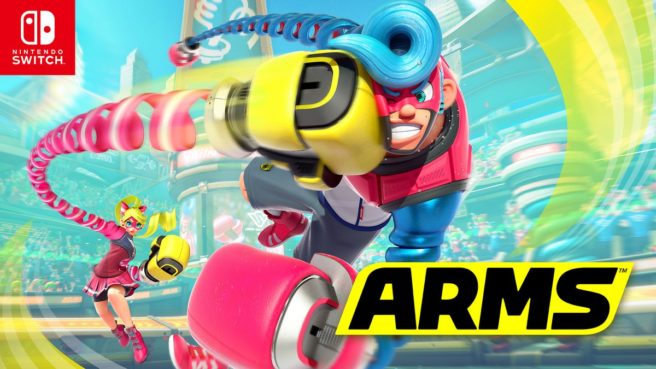 You announced a single-player and online mode, but will there be any other modes available?

There are many more that everyone can look forward to… but I can’t talk about them (laughs). Having only 1v1 matches in the online mode would be too exhausting, so there are other modes being prepared. However, the game is boiling down to 1v1 battles in the end, with them as the main focus and the other modes being on the side.

So will those modes be challenging, unlike, say, a party game?

We’re trying to make the kind of game where your skill in 1v1 matches naturally increases as you play the various different modes.

The character designs are quite interesting too. Their arms are things like springs, ribbons, and bandages.

The five characters in the demo are all pretty straightforward, with the ‘spring’ motif as their basis. Well, aside from the girl riding in the robot (laughs). There will be more bizarre characters like her appearing in the game. The cast will be very varied, with everyone having their own unique features.

Is the time period of the game supposed to be set at some point in the future?

I hear that a lot, but it’s not quite ‘the future’. It feels kind of like older comic books to me, but everyone views it differently depending on where and when they grew up.

It’s difficult to explain this game using others as an example, isn’t it?

There are games like the Virtual On and the Gundam VS series that used this kind of camera, and some people have been reminded of them. We spent a lot of time playing games like those, so there are probably some influences from them in Arms.

I see. What was the reason you chose to use the ‘thumbs up pose’ out of the numerous control schemes available?

During the Switch’s development, we were wondering how we could hold the Joy-Con to play games. Even though it supports the standard grip, the Joy-Con fits in your palms nicely if you tilt them. I thought, if we were to make a game that involved swinging the Joy-Con around, it should use that kind of grip. So, we decided to combine the prototype that became the basis for Arms with that grip style. And, since the internal sensors are more accurate, you can control it with much lighter movement, so I don’t think it will be that tiring. Since there will probably be some people who aren’t good at the physical controls, we made it possible to play using the buttons as well. They can use the buttons on the Joy-Con, or the Pro Controller. It is also possible to play using just one Joy-Con, so you can share the fun and play with others.

Can they play without any problems, using only one Joy-Con?

Yes. But their available actions might be a little limited. So you should use two Joy-Con when you’re looking to get serious… that’s how we designed the game.

What were the reactions from people who played the demo at this event?

I think they were able to understand the controls immediately. But many people were using wild movements, perhaps because they were used to doing that on the Wii. Of course we are making it possible for people to enjoy the game like that as well. But we think that once they move past that stage, people will be able to fight more calmly and aim at their opponents, so I think we’ll have to give people different kinds of advice to help them reach that level.

Well, I’m sure if we watched the skilled development staff fight each other, we’d see the kind of intense action you see in international sporting events.

We used the version of the game available here to hold a tournament with members of the development team as participants. When it first kicked off, the people around were like “something’s going on”. But by the semi-finals and the final match, many people had gathered and were causing a ruckus (laughs).

Yeah, I bet they would. After the game launches, it would be exciting to see skilled players gather for some sort of tournament as well.

I’m hoping the game will be able to generate that kind of hype.

Finally, could you say something to the readers who are looking forward to the game?

Arms is a brand new IP, so we’re starting from scratch. Our goal is to make a game with an enjoyable physical control scheme, that also has a lot of strategy and technical gameplay. I look forward to getting feedback from everyone, because I believe this game has aspects that will evolve together with the playerbase. So I hope you’ll look forward to it.