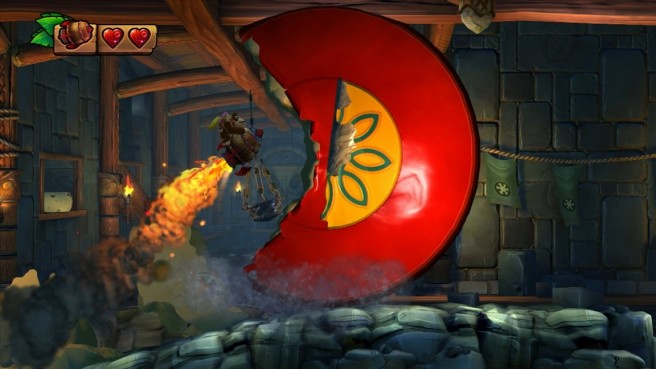 – Snowmads are made up of penguins, owls, rabbits, sea lions, and walruses
– Diddy Kong’s cartwheel attack useful for close attacks
– Use Kong Pow with Diddy to turn all enemies on the screen into extra balloons
– As previously mentioned, Dixie’s Kong Pow turns onscreen enemies into gold hearts
– Dixie’s ponytail is like a propeller underwater for extra speed
– Enemies will get tougher as you progress
– Tucks (penguin-like enemies) start out with Donkey Kong being able to take them out by jumping on their heads or rolling into them
– Later, they’ll have spears and helmets at their disposal, so you can only attack them from behind
– Tucks will then come with double-sided spears and spiked helmets, so they must be stunned first before you can attack
– 6 islands
– 6-7 levels per island
– Boss stage and a bonus level as well
– Bonus level unlocks after collecting all KONG letters in each level
– World 1: Lost Mangroves (rainforest, vine grabbing, zip-lining)
– World 2: Autumn Heights (Bavarian-like mountain, mine carts, hot-air balloons, giant owls, jagged cliff faces)
– World 3: Bright Savannah (tall grass, orange/brown colors, like an African safari, dodge brush fire and penguins with spears)
– World 4: Sea Breeze Cove (blue harbors, sandy inlets, lots of swimming, dodge electric seaweed and manage air supply)
– World 5: Juicy Jungle (tropical forest that produces a rare fruit, home to an elaborate processing plant, jump off jellies to reach new heights)
– World 6: DK Island (Donkey Kong’s tree house has been frosted over, has homages to levels from Donkey Kong Country Returns)
– Will always control Donkey Kong in single-player
– Side characters add to Donkey Kong’s abilities
– Subtle differences between the side characters
– Can switch between side characters by breaking barrels in the levels
– Icons on the barrels rotate slowly so that you can pick your partner
– Offers challenging gameplay

Be sure to check out Game Informer’s full article on Donkey Kong Country: Tropical Freeze this month, which is accompanied by a batch of new screenshots.