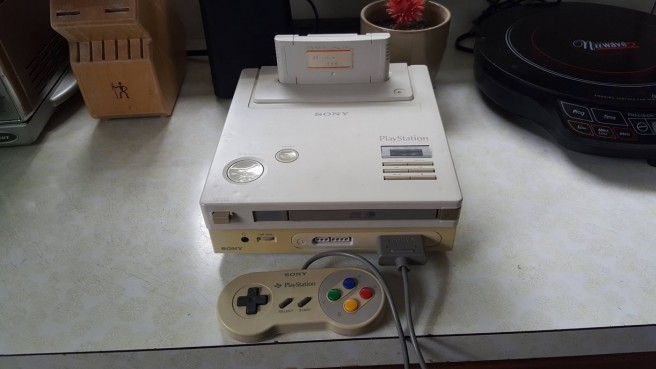 Maruyama: In fact, the only reason I got involved in this was because I wanted to produce a home karaoke system. Since the SNES is always connected to your TV, all you have to do is click the thing in and bam, you’ve got karaoke at home. Back then, we still didn’t have Karaoke on Demand.

* Karaoke on Demand: A Karaoke box that can access karaoke music from a dedicated server by using phone lines or their own dedicated network.

But I wasn’t sure what happened back then. Yamauchi may have decided that “CD-ROMs have potential.” I can see how Nintendo might have felt uneasy due to Kutaragi’s pushy behavior.

* Hiroshi Yamauchi: Born in 1927. The third head of his family’s company, Yamauchi Fusajiro Shoten, which he turned into a global videogame enterprise. Acted as both the president and chairman of Nintendo.

Kawakami: Yeah, I guess so (laughs).

Maruyama: But right before the announcement, Nintendo put a lid on it. Kutaragi, Sony’s director and PR manager, and the not-as-of-yet-president Mr. [Nobuyuki] Idei had come to Kyoto. But while they were in a pre-meeting for the conference, they were suddenly told “No, the conference is being cancelled”.

Kawakami: But, they were under contract this whole time.

Maruyama: Yeah…but, there’s gotta be more to it than that, right? It’s easy to say that Sony was 100% the victim, and Nintendo 100% the wrongdoer.

Maruyama: In fact, that’s the story the company gave all of us while I was working there. It’s a real mystery why Sony never actually filed any kind of lawsuit against them.

Maruyama: I get the feeling something was going on behind the scenes. After all, there had to be a reason Sony wasn’t able to go after them. But back then I was just a software producer, so I didn’t understand everything that was going on. In fact, my team threw a ton of money into the project. I remember thinking, “If I had that kind of cash to spend on up-and-coming artists…son of a b****!”

Kawakami: So, you’d tell your coworkers, “This is all Nintendo’s fault.”

Maruyama: Yeah, loud enough for everyone to hear.

Maruyama: Now, this is where the story really starts. Kutaragi set all of this into motion for some reason.

Kawakami: What do you mean?

Maruyama: The head of Nintendo, Mr. Yamauchi, and the head of Sony, Mr. Ohga, both approved the project originally. But it fell apart right at the end.

Kutaragi had begun stirring up trouble in the company. He even came up to Mr. Ohga and said “Sony’s very own Norio Ohga gave his approval, but the project got canned for no reason. If you back out now, how will you maintain your honor!” And Mr. Ohga responded “You are right. This has brought us shame…”

Kawakami: So you’re saying we still don’t know exactly what happened, but we do know Kutaragi took advantage of the situation.

Kawakami: Still, it’s only natural that the company would be angry.

Maruyama: Well, you’re sort of right. But let me get back to the earlier topic. If you think about, all we were doing was making an external CD-ROM drive. It was just a drop in the bucket (bitter laugh).

Even taking into account their software businesses, Sony didn’t consider it a big deal…?

Maruyama: It was a lot of money for us at Sony Music Entertainment, but to the whole of Sony, it was pocket change. Kutaragi belligerently argued over the royalties made from the sound chips, saying “I made this money, so let me use it at my own discretion.” So I’m assuming the budget was only about 2-3 billion yen or so.

Kawakami: Hrm. That’s certainly not a lot, considering the scope of an enterprise as big as Sony.

Maruyama: And, the CD-ROM drive was just this little thing you stuck on top of the SNES. It’s like we were just renting an office instead of building ourselves an entire skyscraper, and then at the last minute they simply kicked us out. Sure it sucked, but that should be the end of it.

Instead, Kutaragi managed to turned the story around, saying “How dare they! We’ll just have to build an even bigger skyscraper next to them (Nintendo).” But really, the two things had nothing to do with each other.

Kawakami: That sounds like a lot of nonsense (laughs). Kutaragi made the whole thing out to bigger than it really was, trying to use the situation to further his own ambitions.

Maruyama: That’s how it looks to me. He was really a crazy guy (laughs). Still, I don’t really know what went on with Nintendo.