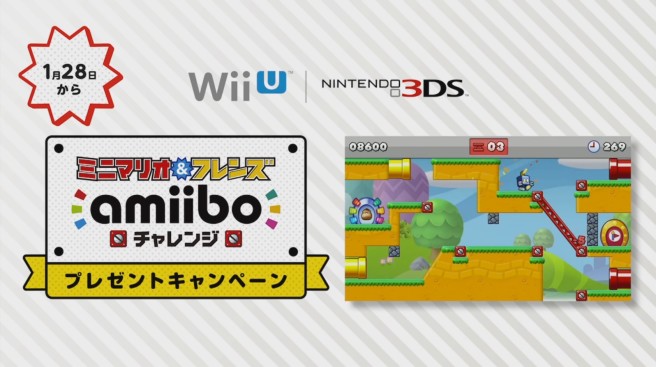 Nintendo has just announced Mini Mario & Friends amiibo Challenge, which is coming to Wii U and 3DS in Japan this month. You can watch a video promoting the title below.

Those who purchase an amiibo figure starting on January 28 can download (with codes) Mini Mario & Friends at no extra cost. Nintendo is making it so consumers can obtain the game for both of its platforms. There are also plans to distribute Mini Mario & Friends on the eShop for free at some point in the future.

Here are some concrete details:

– Touch an amiibo and characters from the toys will appear
– Use the touchscreen to lead them to the goal
– Can use any amiibo
– If you use anything other than Mario and Donkey Kong series (Kid Icarus, Link, etc.) the toy character will default into a generic robot named “Mini Spec”
– Using amiibos from Mario and Donkey Kong series will generate unique toy characters
– The toy character will automatically move forward in courses riddled with traps like pitfalls and enemies
– Draw bridges, add/remove pipes and blocks, etc. to help toys reach the goal
– Some amiibo have special abilities
– There are also special stages that can only be accessed with these special abilities
– Ex: there’s a special goal in a stage that is only reachable with Mini Mario’s wall jump
– When you reach this goal, you’ll go through a special stage exclusive to Mini Mario
– The total number of stages here is over 60
– Mini Mario: Can wall jump
– Mini Luigi: Can jump higher than other toy characters
– Mini Peach: Can float for a short distance
– Mini Toad: Can shrink himself, allowing to pass through small gaps
– Mini Donkey Kong: Can climb steep hills
– Mini Diddy Kong: Can cling on platforms when falling then climb back to it (Note: does not apply to platforms of the same height before falling)
– Mini Bowser: When falling from a cliff, will do a stomping jump (which seems to destroy fragile bricks)
– Mini Bowser Jr: Can walk on spikes
– Mini Yoshi: Can eat some enemies
– Mini Rosalina: Can do a super jump next to a wall