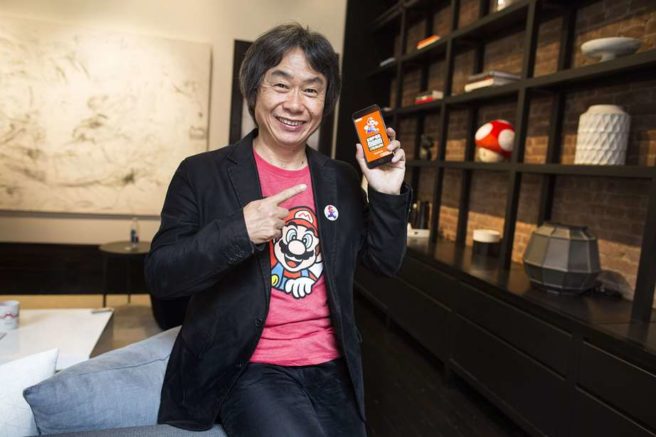 During an interview with Financial Post, Shigeru Miyamoto touched on how Nintendo is handling pricing with Super Mario Run. He and the rest of the company “felt pretty strongly “that we needed to have a form of monetization where you would simply pay once and be able to play as much as you like.”

“When we first started talking about bringing Nintendo games and Mario to iPhone, we talked a lot about what we would do from a monetization standpoint and debated this even with Mr. Iwata back in those days (Satoru Iwata was CEO of Nintendo until his death in 2015).

Certainly there are a lot of different ways that you can monetize a game. In Japan there’s a mechanic that’s referred to as “gacha,” where you keep spending small amounts for a raffle or lottery to get rare items. There are other ways that you can charge people repeatedly to get money. And there are games that rely on a very small number of people who pay a lot of money and the rest of the players play for free.

But we looked at who a traditional Nintendo game player and consumer was, and we feel that in our case with a lot of our products we see parents buying the game for their kids. In that sense, we felt pretty strongly that we needed to have a form of monetization where you would simply pay once and be able to play as much as you like. That was important for Nintendo and our audience. You don’t see a lot of [mobile] games that are set up that way these days, but we felt it was important for us to establish that for this game.”

Beyond that, Miyamoto also commented on how Nintendo’s new mobile efforts are a way of bringing lapsed Nintendo fans into the fold:

“As we’ve taken on this challenge to make games for mobile, as well as the release of the NES Classic, we’ve seen that there are a lot of people who had “graduated” from playing Nintendo games who are now coming back. I think there’s a lot of opportunity there.

We also look to people who maybe feel that video games are actually too hard for them to play, and through the simple interface of Super Mario Run for iPhone they’re able to easily understand the appeal of interactive entertainment. By helping them understand that fun we can open their eyes to the fun of our other games as well.

Previously, the first gaming device that people would interact with was a dedicated game device. Now we’ve reached an era where the first device they’re often encountering is a device that has multiple uses. But what we’ve finally seen over the last couple of years is that mobile phones and iPhones have evolved to the point where they’re able to deliver a gaming experience that meets our level of expectation for what we want our games to be able to achieve.

By using iPhone and mobile devices as a means of reaching people as that first device they interact with, what we’ll be able to do then is introduce people to these mobile versions of our games and characters that will then instill in them the desire to play deeper experiences on our dedicated gaming devices. That’s where we will still put our focus going forward.”