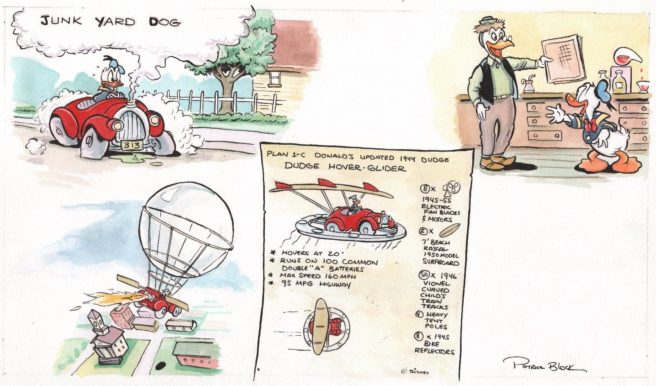 Disney and Junction Point worked together on two Epic Mickey games. At one point, a third title of sorts was planned, but was ultimately cancelled.

Disney illustrator Patrick Block is now selling concept art from what would have been Epic Donald. In his post, Block states that the game would have featured “Donald Duck, Duckburg, and the assorted classic world clan.” The team was “fully paid” for its concept pieces, though the project was never made. Disney ended up changing its focus in the gaming market, so it was scrapped.

You can find concept art from the cancelled Epic Donald below. We also have Block’s message after the break.

In 2012 I had the very great pleasure and honor of working with Warren Spector and Junction Point on a follow up to Disney’s Epic Mickey and Epic Mickey II.

The game was to feature Donald Duck, Duckburg, and the assorted classic world clan. I worked hard on a “Carl Barks” based Duckburg, puling scenes of the town from his comics and doing my best to keep a 1950’s feeling spirit about the game world.

Sadly, this was about the time Disney decided to switch over to it’s current gaming, more tablet oriented gaming focus.

While we were fully paid for our conceptual work on the project, to date, it has not been made.

With the new DuckTales project in the works, I have hopes we still might see the game, with some of our work, get made.

I hope this helps!
Very best, and thanks for the interest in our duck stuff.