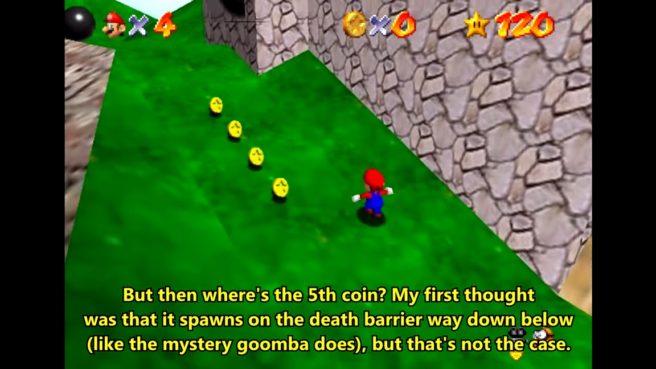 Over the years, fans have detected coins that just can’t be collected in Super Mario 64. Now one person seems to have found another – 20 years following the game’s original launch.

Coins in Super Mario 64 spawn in sets of five. They also come in several pre-set patterns. Yet as you can see above, one area in the Tiny-Huge Island level features a line of four coins. YouTube user UncommentatedPannen has a theory about it all.

“I show that there’s yet another impossible coin in the game, located in the huge version of Tiny-Huge Island. Specifically, there’s a coin spawner there that’s intended to spawn 5 coins in a horizontal line on the ground. However, this coin spawner’s located under the ground, causing the most uphill coin to not load properly. In particular, this coin spawns about 49 units below the ground, triggering a failsafe that causes the coin to immediately unload. Currently, there’s no known way to collect this coin.”

A closer look at UncommentatedPannen’s findings can be found below.