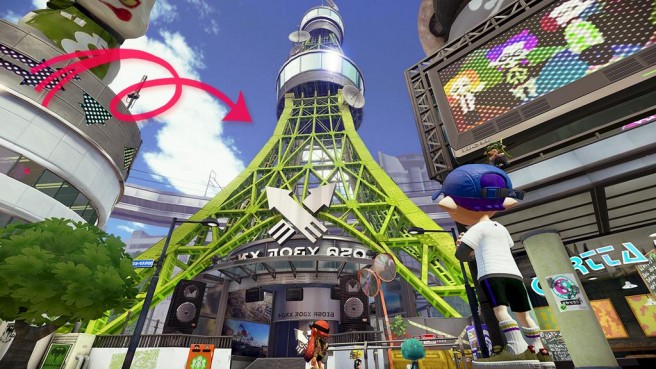 This month’s issue of EDGE has a heavy feature on Splatoon. Details from the article have since emerged, which you can find rounded up below.

– Main article has quotes from Amano/Sakaguchi and Nogami and talks about Edge playing the same demo build of the game the media played a few weeks back.
– The prototype had basic block characters and the ink painting mechanic. You were invisible when you were in your own ink. Amano/Sakaguchi added in jumping, hiding in ink, and the ability to shoot up and down. After that, though, they were confused about what they wanted to do with the game. They thought they might put a squid character on the box art but they needed a humanoid character to hold the guns. They thought a “squid human” wouldn’t sell.
– Amano/Sakaguchi were scolded by Miyamoto in 2013 when doing the prototype who said “I don’t understand. What do you want to do? There’s no appeal to this game”.
– They had an epiphany on Jan 6, 2014 that they could have you switch between a squid and human form and they rapidly got a bunch of ideas about how you swim faster in your own ink, you slow down in enemy ink and take damage, you can swim up walls, etc.
– Amano is a fan of “shooting games”, but when he would invite friends to play with him they would get frustrated. He wants to make a game that is different that people who aren’t fans of traditional shooters can play.
– Splatoon has no voice chat and never will. Amano says: “This is coming from personal experience. When I played online games, I didn’t like the negativity I got and people telling me ‘You’re crap. Go away’. So we wanted to focus on the positive aspects of online gaming”. Amano says he’s not saying that chat in an online game can’t contribute to fun but they want to grab new players.
– Confirms that there are some Splat Zone maps with more than one boxed-off area to capture. If you claim all the territories your timer starts to count down, but if your opponent captures one the timer stops.
– The same primary weapon can come in a variation with the different sub/special weapon
– Can start firing after a super jump right before you land
– More online modes besides Turf War/Splat Zones
– One respawn point per team, but you’re invulnerable while on it to discourage campers.
– A lot of the designers on the team are in their 30s, so the 90s style with street fashion and trainers is a big inspiration for the outfits
– Trick to balancing the weapons according to Sakaguchi is to make people want a little more (“if only it could shoot a little farther/shoot faster”). They aren’t going out trying to make the strongest weapon in the game.
– 15 singleplayer challenges and “5 rare pieces of gear” for each of the 3 Amiibos
– Q&A with Katsuya Eguchi. Thinks Splatoon IP has huge potential. Important to have things that will draw attention to the game after release (basically hints at content updates/DLC).