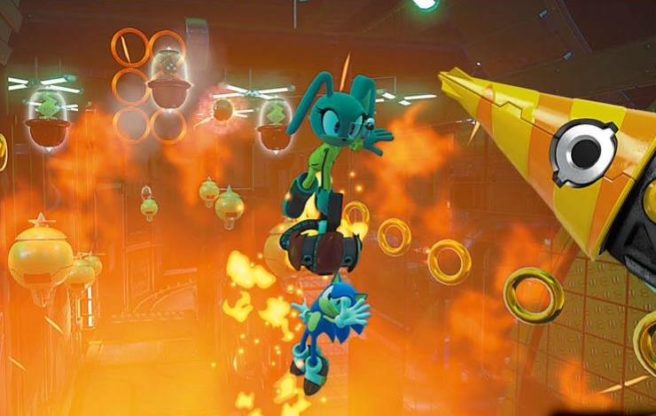 Famitsu has a new feature on Sonic Forces this week. Along with announcing a November 9 launch for Japan, the magazine provides details about the game itself, including the Hero Character and new Tag Team stages.

One of the aspects Famitsu covers is avatar customization. In addition to choosing between the seven species, you can also set the gender, skin color, and face to your liking. Each Hero Character species will have its own unique gameplay abilities. For example, Wolves can pull in surrounding rings.

You can edit the costume by using parts collected in the game. Also, there is a variety of costume parts that can be edited, from headpiece, glasses, to shoes. Colors can also be edited.

Wisps from Sonic Colors are returning. Their powers are being borrowed to create special weapons called Wispons. The Hero Character can choose from a variety of Wispons, from Flamethrower to Thunder Whip. In addition to normal attacks, each Wispon will also have special actions such as air jumping. Players can mix the Wispon type with species ability to create their own play style.

In Sonic Forces, there will be some stages dedicated for Tag Team play between Modern Sonic and the Hero Character. You can perform combo attacks such as using avatar’s Wispon first and then finishing off with Sonic’s Boost attack.

The avatar Wispon’s special attack can also be used as a shortcut. For instance, using the air-jump to reach difficult places is possible.

Famitsu covers some Sonic Forces story beats to close out. Doctor Eggman is a genius scientist who never gives up in his dream of world domination even after he was defeated by Sonic over and over. This time, his wish almost comes true by conquering 99 percent of the world.

Legacy bosses that Sonic has beaten in the past are returning, such as Metal Sonic, Chaos, and Zavok. Also, somehow, Shadow who used to fight with Sonic is now seen joining the other side.

The new leader is named Infinite. He has a mysterious power to control odd cube-shaped objects. He’s not only strong, but is also faster than Sonic. The true nature of his relations with Doctor Eggman is still unknown.