The Alliance Alive devs on how the RPG is different from The Legend of Legacy, game features, more 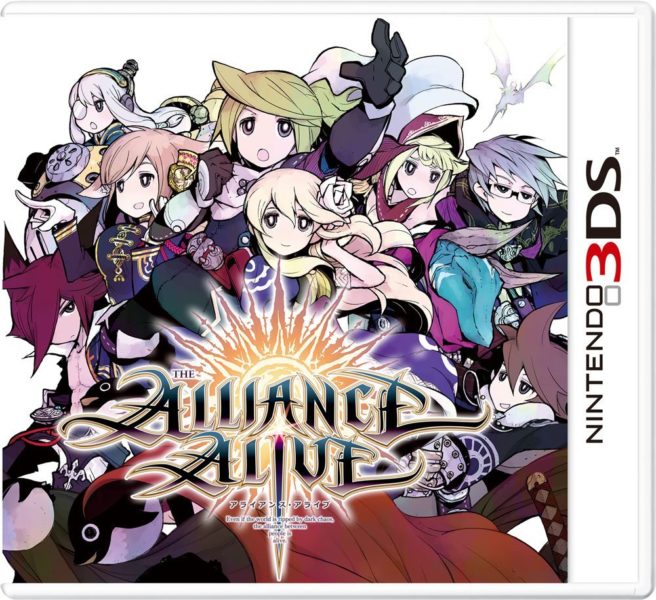 The Alliance Alive is the next 3DS RPG from FuRyu following The Legend of Legacy. Famitsu spoke with director Masataka Matsuura and design lead Kyoji Koizumi as part of a very in-depth interview to talk more about the game.

The Legend of Legacy was a project created in a short time, and as such it was designed to have simple features and not be expandable into a sequel. If they were to make a sequel, they would have to rethink the hardware and production structure and not include a story feature like The Alliance Alive. It would take too much time to prepare all of that, so it was something Matsuura never even proposed.

Koizumi said that the big difference between the two RPGs is in the party characters. The Legend of Legacy only had up to three party characters with the Role Shuffle feature so they can take multiple roles. But The Alliance Alive on the other hand has more party characters in five, and their roles are more fixed here.

Koizumi also emphasized the positions like Guard and Attack to be easier to understand by explaining it in conversations between the characters in the prologue. Matsuura chimed in and said that they are using the know-how on battle strategy they got from The Legend of Legacy, such as a strong enemy going from unbeatable to easily beatable by changing the formation.

The concept of The Legend of Legacy was learning Spirit Arts from spirits and using them to explore the island. In this new game, magic is split in two: Demon Arts and Seal Arts, but they are also categorized in the same Techniques section as Sword Arts and Martial Arts. So although there are some restrictions in using them, in general they should be easier to use than in The Legend of Legacy.

The Alliance Alive battle features will be unlocked periodically so that users won’t get overwhelmed from the start. Ignition and Final Strike are not available in the beginning because if weapons break early, then the play tempo would worsen.

In the middle of a trend where people prefer games that are easy to play, Koizumi still wants to create new rules that make his games more enjoyable if followed. However, he won’t force the rules to be understood instantly – rather the rules will become naturally understandable as the story flows. Matsuura said thanks to that, the demo received mostly favorable reception from many users.

You could only control two characters in the demo, so the difficulty was made a bit lower. In the full game, after the prologue is over and the protagonists have gathered, the difficulty will rise from there.

The Ignition and Final Strike battle features were included because Koizumi wanted them to be part of the key features that attract players. However, he didn’t want it to be too complex, so he made them into a simple system where “a powerful hit can be dealt by breaking the weapon”. In The Legend of Legacy, you would have to prepare things beforehand such as raising levels, and only experienced players could obtain them during battles. So this time in The Alliance Alive they made it so that powerful hits can be dealt without complex computations. The system has its own risk though, so it’s up to the player on whether they want to use it or not.

The Awakening system is returning from The Legend of Legacy. Koizumi personally thinks that learning techniques and leveling up is the same as sports training. For example, running regularly every day won’t make one run a second faster every day, but if they do train often, eventually they will suddenly have a great time decrease. Koizumi tried implementing that concept into the game.

Users have been requesting “a feature equivalent to experience and levels obtained from repeated battles”, and the team implemented the Talent system for that. Players can spend the collected Talent points to obtain abilities like raising the probability of learning techniques or reducing SP consumption. However, there are no skills that directly affect stats, and each character’s stat caps are balanced because they don’t want the world setting to be broken by overpowered characters.

Since the player can freely walk on the world map now, the team has added a lot of things, such as monsters, items, and caves. There are also larger monsters that will trigger special battles. Koizumi has prepared more special battles than other titles he worked on. Matsuura likes the way Koizumi prepared the battles, so he had him create many of them. There are also players who tried out the demo that could beat the Water Demon with just the two characters available.

The Alliance Alive is a game with a high degree of freedom that’s not just following the story, but lets players take detours in multiple places. Once the ark has been unlocked, there will be even more locations unlocked and available to explore.

There are two types of Guild Towers available in the demo: Intelligence Guild and Library Guild, the latter of which allows for the analysis of monsters and techniques. Once the player has progressed far enough, they will have to build an Intelligence Guild Tower. By recognizing the word Telegraph and fighting around the tower, eventually characters belonging to the guild will support the player in battles.

The player can not only use existing towers; they can also build new Guild Towers at shining pillars found on fields. Wyatt is a tower designer and Barbarossa is the builder. After obtaining the ark, their mission is to “build Guild Towers in each worlds separated by the Black Current, and make a strong communications network”.

Other than the first two Guild Towers, there is also a Smithing Guild (craft weapons and upgrading it will allow crafting stronger weapons with better materials), Strategy Guild (allows registrations of new formations and adds more position types other than Attack, Guard, and Support when upgraded), and Seal Magic Guild (allows development of new Seal Magics and Universe Vessels).

In total there are five types of Guild Towers, but the Intelligence Guild is the most unique. It can reduce the spawn rate of specified monster types, and it can also inform the player when a strong enemy appears.

To build a Guild Tower, first you need to find a character that has the Guildmaster qualification. Each character has different Guild compatibility, so the Guild Tower type will depend on the character chosen. Placing the same Guild Towers nearby will raise the Guild level and also improve its effects.

Koizumi notes that it may be hard for the player to expand the Guild as they wish. For example, when they want to expand a Smithing Guild but don’t have any character with the Smithing Guild compatibility, or the locations between the two Smithing Guild Towers aren’t close enough.

Matsuura hopes players do not get fixated on just one feature such as just expanding Guilds or collecting characters because it will slow down the game tempo. The player can also choose to not recruit a character and let them die instead to get a powerful weapon as the remains, so there are merits and demerits to each choice. Matsuura hopes players can purely enjoy “the results of the choices they took”.

Koizumi added that expanding Guild is completely optional and players can progress the story without expanding it at all. The same goes for collecting characters. So he said that it’s fine for the player to enjoy the game if they do it leisurely.

Selections in the game do not have any major effects on the main storyline and each of them have their own merits. As one example, there is a choice on whether to help somebody, or to let them die and obtain the rare item. There is also another merit if one chooses to help. Completionists may be dissatisfied with this game because it won’t let them complete every collections in one run, but Koizumi said not to worry too much about it and don’t get too tense in playing it.

Matsuura mentioned one more reason why they added many selections. Recently many games had Let’s Play videos uploaded, so some people who watched those videos didn’t have to buy the game because they already understand the story. But when there are selections, people will wonder about the continuation of the other selection that’s not uploaded.

There are also many sub-scenarios that do not affect the main story but will make people intrigued, such as beating a certain monster in the prologue will make the player targeted by its relatives later in the game.

There are some people who just go towards progressing the main story, but Koizumi made it more interesting for players who take detours as they can get new discoveries. Many of the strong monsters are located on those detours, which should help players in leveling up characters.

More new characters have been introduced after the nine protagonists. Garil and Ursula have the plainest stats as they are the first playable characters, and they can be raised freely as the player wishes. Other characters that join later will have quirks like having high attack power or excel in Seal Magic. The later they join, the quirkier their stats will be.

Most of the characters can be raised freely by the player. An exception is Robins, who as a penguin cannot equip weapons, so he uses a unique Penguin Martial Arts instead.

In The Legend of Legacy, the story was about experienced warriors exploring uncharted lands, so the average age of the characters had to be high. However, in The Alliance Alive, the story is about boys and girls who are brimming with curiosity and grow through adventuring, so many of them are younger in their teens. Matsuura personally likes Shiki since he’s an older character in the midst of the young party.

Players can also expect some fighting power from Robins. When he’s added to the party, he will also interrupt conversations everywhere with odd voices or loitering around as he wishes, so he would be a very fun character to watch.

To conclude, The Alliance Alive’s appeal is in the adventure that expands after the player has obtained the ark. Matsuura hopes players will enjoy making their own choices, as the characters will have different reactions based on each choice taken. Matsuura once again reminds players that playing The Alliance Alive and The Legend of Legacy will feel different, just like raising a tomato and green pepper in the same farm.

As for Koizumi, he concludes that The Alliance Alive has many features that make players want to take detours. It will be hectic to complete every feature in the game, so he doesn’t mind if players just focus on the things they’re really interested in. He hopes player won’t be bothered completing everything on the first run and play the game in a leisurely manner and explore the game features as they like.