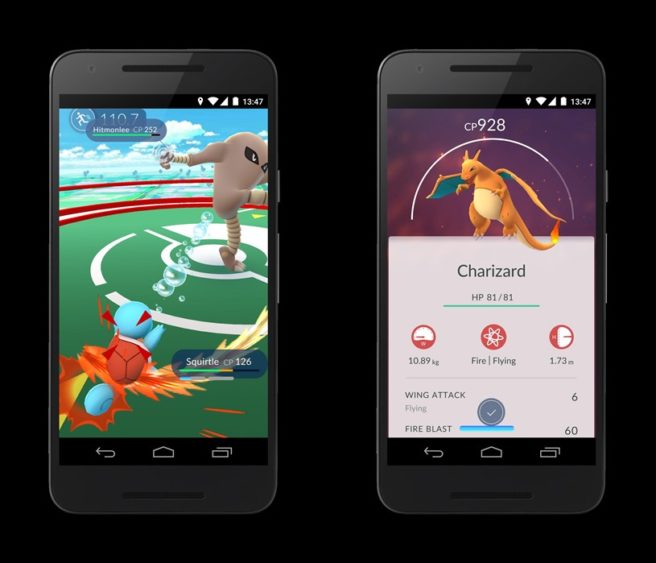 Various members of the media were recently given the opportunity to go hands-on with Pokemon GO. One such outlet was GamesBeat, who has now written up a comprehensive report on the game. The site has information about the different aspects of gameplay, microtransactions, Pokemon GO Plus device, and more.

We’ve rounded up all of the details in summary form below. You can also read GamesBeat’s full piece here.

– Same data sets as Ingress are used: monuments, parks, and other local areas of intrigue
– Combination of the real world and the digital

“If you said, ‘What’s the core essence of the game?’ it is that trying to mimic what the world would be like if Pokémon really lived in it. That’s the fundamental mission of the game. They’re out there and you have to discover them and capture them.” – Niantic CEO John Hanke

– Customizable avatar
– Have your own level
– Your level goes up as you do tasks like catching Pokémon or battling at gyms
– Achievements included for things like how long you have walked, how many Pokémon you’ve caught, and even some for different-sized critters
– One achievement example” Big Magikarp achievement
– Map screen is the main interface
– This shows your real-world location and points of interest across the map
– PokeStops: blue cubes where you can collect items, Pokemon show up on the map as icons of each Pokemon
– Gyms show up initially as white icons, and then change based on which team is in control
– Catch Pokemon or collect items from PokeStops by walking close to those locations on the map

“To me … the heart of the game is integrating that sort of discovery and fun of the video game with the fun of being outside and exploring new places. I just think that’s a great combo and I hope players are into it.” – Hanke

– Pokemon GO will draw from the geology of where you are located
– More water Pokemon can be found if you’re closer to water and these might be rarer in areas that aren’t adjacent to a lake, river, or a bay
– Will be harder to find certain types if you aren’t located close to certain types of terrain
– Flick the screen to throw a Pokeball
– Different Pokemon have different capture rates
– Abra still teleports away
– If you capture the same Pokémon multiple times you’ll unlock evolution shards for that creature
– Collect enough shards and you can use them evolve that creature
– Pokemon eggs included in the game
– Once placed in an incubator, eggs get progress bars, which will show you how far you have to walk to hatch them
– The further you have to walk the rarer the Pokemon that will burst forth will be
– Begin with 1 incubator
– Can purchase additional ones as in-app transactions

– Trading is coming, but won’t be at launch
– Niantic not saying how many Pokemon are in the game
– The Pokedex only shows you up to the number of critters you’ve encountered
– That number of Pokemon is also not fixed: it launches with a set, with plans to add more down the line

– Discovery (PokeStops and Gyms based on interesting real-world location), exercise (hatching eggs, walking outside), and social are the three big elements of Pokemon GO
– Social aspect is gym battling
– Gyms are preset, real-world locations where teams can battle over control
– Three teams can battle to control gyms
– They have their own levels and prestige rankings
– The higher level a gym, the more monsters trainers can leave behind to protect it
– You have to be physically at a gym in the real world both to add Pokemon to it and battle
– The team that is in control of a gym can also train Pokemon
– This holds true even while an take-over attempt is in progress
– Training makes it more difficult for the gym to be taken over by the opposing team
– Real-time battles
– Many people at once can try to take down and capture a gym for their team
– Niantic still working on the upper limit of how many people can take place in these battles at once
– Dozens were mentioned
– Tap the screen for a light attack
– Swipe to dodge
– Long press for more powerful attack
– Each Pokemon is controlled the same way
– Different moves for Pokemon
– The basic elements of gyms will be in Pokemon GO at launch
– Other ideas will be added
– No functionality with the 3DS games, but Hanke said it’s a cool concept
– Take pictures of locations with the camera and AR Pokemon included in the photo

– Wearable device designed and manufactured by Nintendo
– Features a tri-colored LED that doubles as a button and a vibration motor
– It pairs with your phone
– Lets you play without staring at your phone the entire time
– The device alerts players when they are near PokeStops or wild Pokemon
– Can claim items from PokeStops and capture Pokemon through the device by pressing the button “in a certain way and a certain pattern”
– Information is encoded in the pattern of vibrations and colors on the device
– As players get to know the device they will be able to figure out what the device is communicating
– Device also lets you get alerts from the game even when the app is running in your phone’s background
– The app itself, without the device, can only issue alerts when its open in the foreground
– Only a supplement; doesn’t replace the game
– Launching “more or less” around the same time as the main game
– Price not announced

– Free-to-play with microtransations
– Niantic still thinking about pricing
– Can only buy basic Pokéballs (the better Pokeballs are only at PokeStops)
– Can’t just pay to get better balls
– Can pay to expand your backpack and the number of items you can hold, as well as the carrying capacity for your Pokemon
– The store will have other items as well such as incense that lets you attract Pokemon to your current location and additional egg incubators

“We tried not to be paid-to-win. We’re trying to provide things that are helpful, save time, just basically make it more efficient, perhaps, to play. They aren’t like shortcuts to ultimate global domination. We try to reserve that for hard work and skill.” – Hanke

– No word on a release date yet

“All I can say today is when it’s ready,” Hanke said. “I think we’re getting closer, obviously as we roll out of the beta you can sense some tempo there. But we haven’t nailed the final date yet.” – Hanke