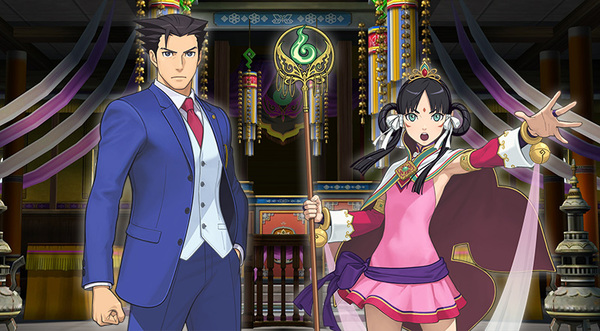 Capcom just published a new blog entry on their website, examining the history of Phoenix Wright and giving us a more in-depth look at his new nemesis, Rayfa Padma Khura’in, who makes her debut in the upcoming game Ace Attorney – Spirit of Justice. You can find the blog post below.

With a recently announced September 8th release date, Phoenix Wright: Ace Attorney – Spirit of Justice is now less than a month away! The sometimes serious, often goofy, but always loveable cast of the Ace Attorney series has grown significantly over the years, so today we’re kicking off the first in a series of character profiles to tell you about what some of the returning characters have been up to, and introduce some of the characters they’ll meet along their journey in the upcoming game. Today we have the legendary attorney himself, Phoenix Wright, and series newcomer, the Royal Priestess and Princess of the Kingdom of Khura’in, Rayfa Padma Khura’in (and I thought “Chief Prosecutor” was a fancy title…).

Phoenix Wright, currently head of the Wright Anything Agency, has been around since the very beginning. That’s probably not a surprise to most, even if you’re not familiar with the series. His name’s right there in the title after all. Phoenix has been through quite a lot since his early days as a rookie attorney, when he first took on a case defending his childhood friend, Larry Butz, against a murder accusation. Thanks to the help of his boss and mentor, Mia Fey, and his own deduction skills, Phoenix cemented his ability to turn the case around when he was on the brink of defeat, ultimately proving Larry’s innocence.

While Phoenix got a lot of aid from his mentor during that first case, many more “Not Guilty” verdicts that followed can be chalked up to Phoenix’s relentless pursuit of the truth and his unwavering belief in his clients. This isn’t to go without crediting his “ace assistant,” Maya Fey, a spirit medium-in-training and sister to Mia Fey, who offered quite a bit of help via her unique gifts. We’ll talk more about Maya soon (promise!) but among her aid as an assistant, Maya also gave Phoenix another important gift: a magatama. The magatama was later charged with spiritual energy, which allows Phoenix to see Psyche-Locks, which are visual representations of how strongly a person wishes to keep something secret in their heart. These locks can only be broken with irrefutable evidence.

When we catch up with Phoenix in Spirit of Justice, he’s just arrived in the Kingdom of Khura’in to visit Maya and celebrate the end of her long spiritual training. Despite being a foreigner in a foreign land, Phoenix can’t seem to stay out of trouble, and soon finds himself representing his tour guide in a murder trial in Khura’in’s court system. In this precarious situation, he’s not only putting his credibility on the line, but also his life due to a local, unforgiving law known as the Defense Culpability Act. Phoenix is in for the legal battle of a lifetime – literally!

Rayfa Padma Khura’in, at just fourteen years old, carries a surprising amount of weight on her shoulders. Not only is she the Princess of the Kingdom of Khura’in, but she is also the Royal Priestess and must perform various ceremonies including the elegant Dance of Devotion each day for the dedicated Khura’inist monks at Tehm’pul Temple. In the courtroom, Rayfa’s powers of Spirit Communion also allow her to guide the soul of the victim to a large reflecting pool in the center of the hall, a practice known as the Divination Séance. With this, the pool will display for all to see the last moments of the victim’s life, and with Rayfa’s insights based on these scenes, judgment is then passed.

While this might seem unusual elsewhere, for over twenty years, Khura’in has not had lawyers – in fact, the legal system seems to be based almost exclusively off of the Divination Séance and Rayfa’s insights and interpretations of the crime as it happened. Since these visions show the last moments of the victim’s life, including the senses of sight, taste, touch, hearing, and smell, there’s little room to question Rayfa’s interpretations of events, leaving defendants with little recourse. Once Rayfa has passed her judgment, the court’s Judge follows suit. Rumor has it that since the séance trials began, not a single person has been proven innocent….

Despite her myriad duties and roles, Rayfa keeps a surprising sense of calm about her. Well, maybe calm isn’t quite the right word. It’s more of a… frosty air of superiority, often using her position of power to take jabs at anyone who would dare question her insights or the court system. Then again, maybe that’s just part of being the princess – after all, she’s still only a teenager. Maybe there’s more to Rayfa than her royal attitude problem initially suggests?

We’ll leave that for you to find out when Spirit of Justice is available for Nintendo 3DS on September 8! In the next edition, we’ll cover Maya Fey, the spirit medium almost-no-longer-in-training, and Ahlbi Ur’gaid, the young monk who likes to (over-)explain everything to travelers visiting his homeland. See you soon!