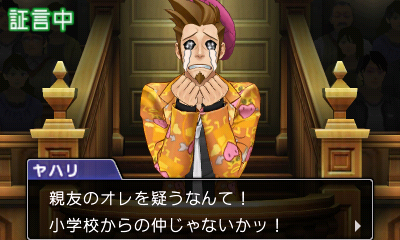 Capcom has announced the first bit of DLC that will come to Ace Attorney: Spirit of Justice, although the announcement is currently for Japan only. The “Turnabout that Crosses Time” will be a plotline that takes place after the story of the regular game (and will not even be playable until the main story is completed). The DLC will launch June 30th, and it will actually be free for players until July 21st. It is also described as a complete volume, containing investigation and courtroom sections, and starring Phoenix Wright, Maya Fey, Miles Edgeworth, and Phoenix’s childhood friend, Larry Butz.

The DLC will also be given an introduction during a livestream later today, which can be viewed here. If any important info comes of this stream, we’ll let you know.