Posted on September 14, 2021 by Brian(@NE_Brian) in General Nintendo, News, Switch 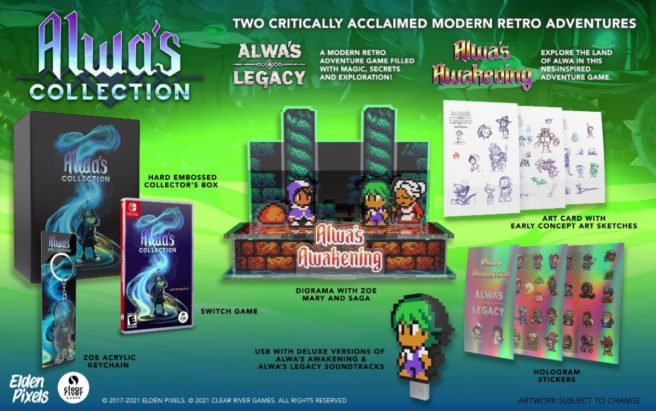 Today, Clear River Games and developer Elden Pixels announced that the retro Metroidvania platformers Alwa’s Awakening and Alwa’s Legacy are getting the physical treatment on Switch as part of the Alwa’s Collection. All copies will include three holographic stickers. Alwa’s Collection will cost $29.99 / €29.99 / £25.99 at retail.

Limited Run Games will also be offering a limited edition for Alwa’s Collection. This will include the deluxe versions of soundtracks on USB, a game scene diorama, art cards with early concept art sketches, and a keychain, delivered in a hard embossed collector’s box. Pricing is set at $69.99.

If that wasn’t enough, there’s also a bit of news for Alwa’s Awakening. Thanks to Retro-Bit Publishing, the game is debuting on the Nintendo Entertainment System with cartridge editions of the old school platformer. Note that this will be an extremely limited and packed with exclusive content.

Retro-Bit Publishing is planning a new Digical version of Alwa’s Awakening: The 8-Bit Edition. Digical combines aspects of both DIGItal and physiCAL releases for those interested in playing the digital copy of the game via ROM without all the bonus extras found in the physical releases, and still supporting the developers at the same time. The game ROM and exclusive digital content will come in a Zoe themed USB memory stick as well as a display case.