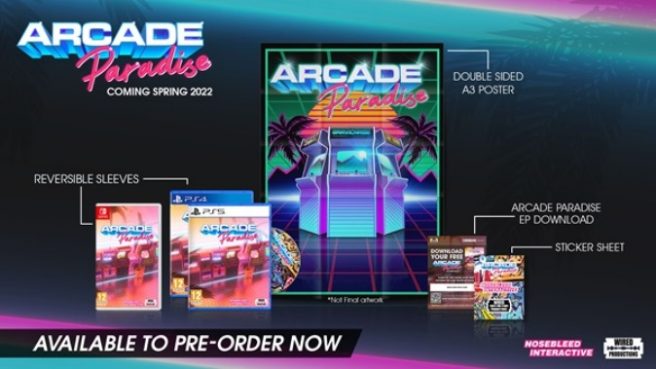 For more on Arcade Paradise, read the following overview:

Welcome to Arcade Paradise, the 90s-fuelled retro arcade adventure. Playing as Ashley, your father, Gerald (voiced by The Witcher’s Geralt, Doug Cockle), has gone to the Riviera and given you the keys to his laundry business tasking you to run the tedious day-to-day. Rather than washing rags for a living, you decide to turn the family laundromat into the ultimate arcade. Play, profit and purchase new arcade machines, with over 35 to choose from, inspired by a generation of Arcade games from the 80s and 90s. Arcade Paradise will feature newly created ‘classics’ such as Knuckles and Knees, Zombat 2, Woodgals Adventure, Vostok 2093, Gravichase, and the bodacious Racer Chaser in FULL 3D and many more.

Outside of today’s physical release news, Arcade Paradise also received a new “Games, Games, and More Games” trailer today. You can check it out below.