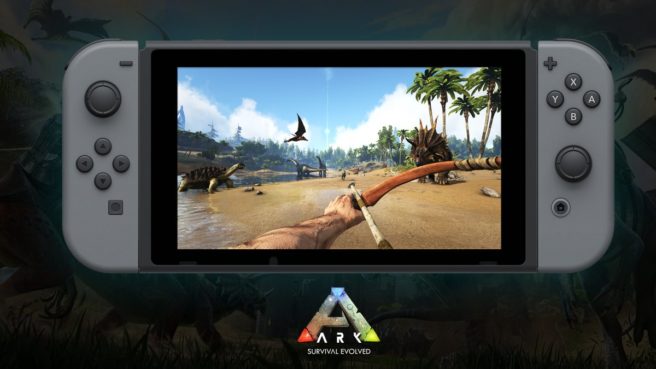 At GDC today, a Switch version of ARK: Survival Evolved was announced during the Unreal keynote. This was all possible thanks to Abstraction Games, who is handling the port. It’s in such an advanced stage that it was demoed live in front of attendees. Abstraction CEO Ralph Egas mentioned to GamesIndustry that the team “created something you could almost send for certification.”

Egas shared the following regarding the team’s progress when it comes to ARK: Survival Evolved on Switch:

“Studio Wildcard only asked for a first playable. That’s not even a straightforward port. They just want to be able to play it, but maybe sound isn’t there yet. Or no cutscenes. Or not all the controls are implemented yet. Maybe you can walk and do this and that, but you can’t craft anything yet. That’s a first playable and that’s what we agreed. But we went all the way and did a straightforward port on every sub-system, and then some. We still have some work to do, but it’s already running close to 30fps in most cases.”

Egas also spoke about Switch’s power, developing for the system, and the work involved:

“Switch is not as powerful as a PS4 or Xbox One. Everyone knows that. Having said that, the difference isn’t as big as the general perception would have you believe. In some locations you need to downsize a bit on the distance you’re able to view. But not as much as you’d think compared with Xbox One and PS4. Obviously, in terms of Xbox One X and PS4 Pro, that’s a different story. But compared with the base platforms, Switch is not that bad.”

“Performance is not really the issue. The issue instead is in the size of carts. The 32GB carts are expensive, you shouldn’t be wanting to do that. So we need to fit everything on 16GB, whereas the standard game on PS4 is much, much larger. It’s a crazy ratio we’re talking about. However, thankfully, there are a lot of opportunities for reduction without changing anything anyone will notice. Another thing we can do is do a cartridge version and then do staggered downloads to make the game complete. That’s probably the hardest part. Finding all the new technicalities and quirks that you get with a new platform.”

“Of course, with the runtime memory footprint, there’s not as much as PS4 or Xbox One, so that means you need to reduce the content that is being used at any one time. Partially that’s a case of having fewer dinos here or there, and downsizing on actual content experience. But that’s only a bit. The rest is just from clever compression algorithms.”