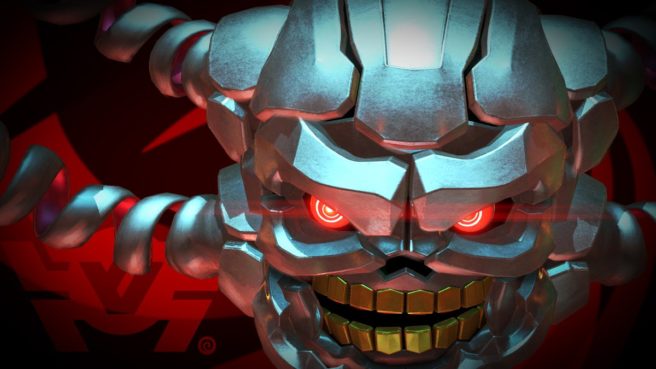 This week’s ARMS update is going to be pretty extensive. In addition to adding Max Brass, his ARMS, and a new stage, a new versus mode is also incoming.

Producer Kosuke Yabuki spoke about the new mode with Eurogamer:

“I can talk about it a little bit now – Max Brass is the main part of tomorrow’s update, but there is a new versus mode where in a fight between two or three players there’s a Hedlok mask players battle over, and when you get the mask your own character can turn into Hedlok. If one player turns into Hedlok it’ll be up to the other players to take him down. The Hedlok mode won’t just be available in one v one versus modes – it’ll be available online and in every multiplayer mode.”

Yabuki also reiterated that the new update will include balance tweaks. As for what’s planned in this area, he said:

“One thing with a balance update – if you say we’ve nerfed this character, fans of that character won’t be happy about it! That’s something we’re aware of, and with this update the balance adjustments are done in a way not to make any character less good than they are at the moment.

“One thing I definitely think about, and that I’m not a fan of, is when it’s possible to win using one technique over and over again, repeating the same thing and winning like that. That’s something, in terms of the game balance, that we’re thinking about and trying to adjust it so that’s not possible.”

When Eurogamer brought up how Ribbon Girl can keep airborne on one particular stage and Kid Cobra being able to repeatedly jump and punch for a win, Yabuki said: “We don’t want to completely stop him from doing that, but adjusting the balance so it’s not quite so powerful.”

Finally, Yabuki believes that Kid Cobra may not be as popular following the update’s release:

“After the update, that will probably change. I’d like to create an environment where one particular technique or one character with a certain combination of Arms isn’t too dominant, and that everyone can enjoy the game using a wide variety of characters and techniques.”