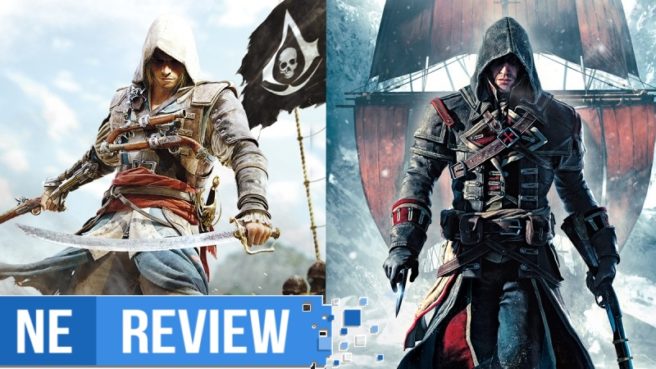 Back in May, Ubisoft pulled a rather curious move by releasing Assassin’s Creed III – and its counterpart, Liberation – for the Switch. The port was widely criticized for being poorly optimized and somewhat irrelevant, especially considering the leaps and bounds that the franchise had made in scope and polish since the game’s original release. Many reviewers (myself included) longed to see the series’ fourth entry, Black Flag, released for the Switch instead – albeit without the low frame rate and ropey audio present in Assassin’s Creed III. Fast forward to today, and Ubisoft has only gone and done, well, exactly that.

Assassin’s Creed: The Rebel Collection is one of the most value-oriented Switch releases I’ve played this year, second only to CD Projekt Red’s port of The Witcher 3. Ubisoft has managed to cram not just Assassin’s Creed IV: Black Flag and all of its DLC into a single 19GB download, but the PS3/360 spinoff Assassin’s Creed: Rogue is present in its entirety too. For a man such as myself, over 100 hours of unfiltered swashbuckling is admittedly something of a cheat code – one that gets me horrendously excited by default. If quantity is your thing, The Rebel Collection has you covered. 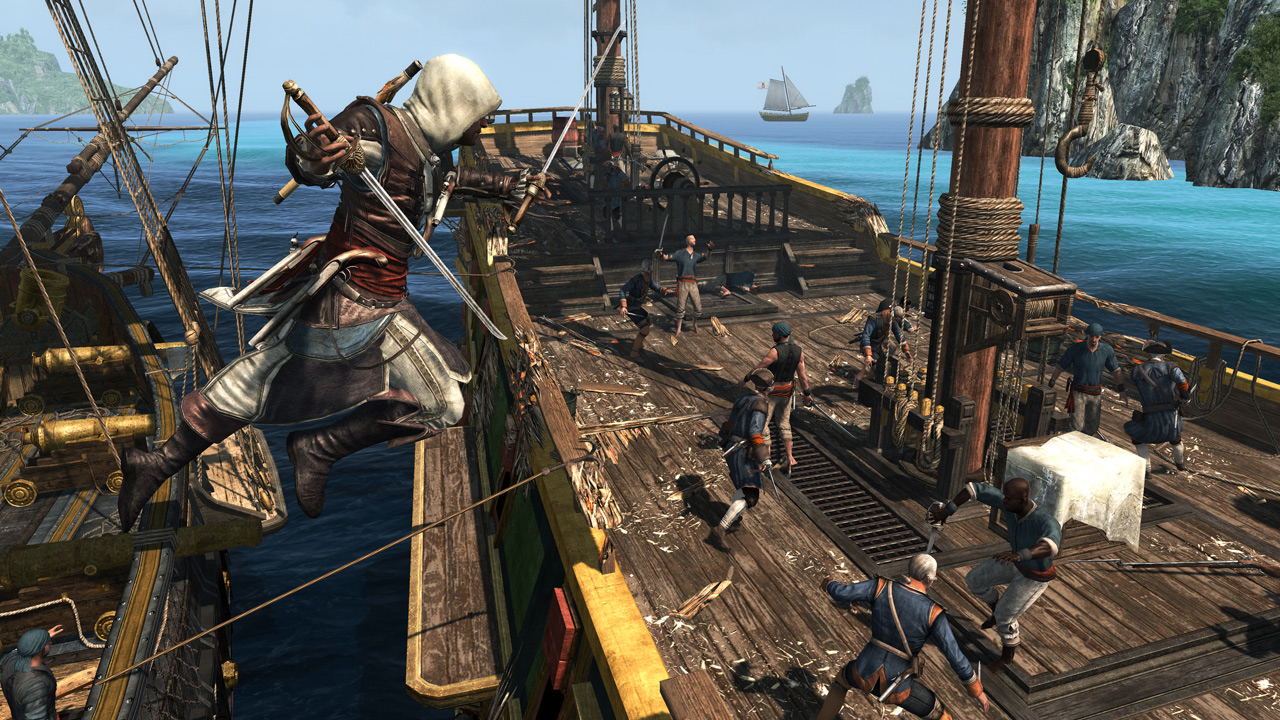 Quality is another matter entirely, and in this case it can essentially be boiled down to a two part question: “D’ya like pirates?” and “D’ya like collecting?”. Assassin’s Creed IV served as something of a hard reset for the series following the events of III, and as such, all of the modern day sections are far more accessible to new players than one might imagine. The meat of the experience – the historical stuff – revolves around Edward Kenway: Career Criminal, as he haphazardly finds himself at the center of an age old struggle for power between the Templars and the Assassin’s Order. He’s also a pirate (important detail) meaning you get to be one too. His arc throughout the game is not too dissimilar to that of Han Solo in the original Star Wars trilogy: a loveable rogue (read: actual criminal) who finds his purpose at the focus of a conflict far greater in significance than himself.

The narrative does a decent job of merging the many different gameplay aspects of Black Flag together into a more cohesive package than expected. On land, it’s your typical fare – sneak around, run up walls, and use swords, blowdarts and now even guns to dispatch baddies – all against the tranquil sun-soaked backdrop of the West Indies. Once Edward gets a hold of his own ship, however, the experience opens up into something truly memorable – even if it’s one that’s now over six years old. At sea, you can plunder and pillage to your heart’s content, and the more trouble you cause, the more resources you can gather. These resources can be put into a number of different areas: you can add ships you have captured to your fleet and send them off on missions around the world, or you can strip them of everything they’re worth to improve your own ship’s arsenal.

It’s the clear delineation between the on-foot and in-boat portions of Assassin’s Creed IV that gives the game an addictive streak. Once you begin to tire of one activity, there is always something entirely different to sink your teeth into, be it collecting trinkets, improving your gear, or hunting the wildlife. It’s hard to pull yourself away from that – heaven knows I tried, and heaven knows I failed (much to the detriment of my now-shattered sleeping pattern). The gameplay loop is fundamentally appealing, and Ubisoft knew this – which is why it forms the basis of all the content included in The Rebel Collection. The DLC adventure Freedom Cry and the standalone outing Rogue follow a very similar framework, and in the context of one big package it works wonders. 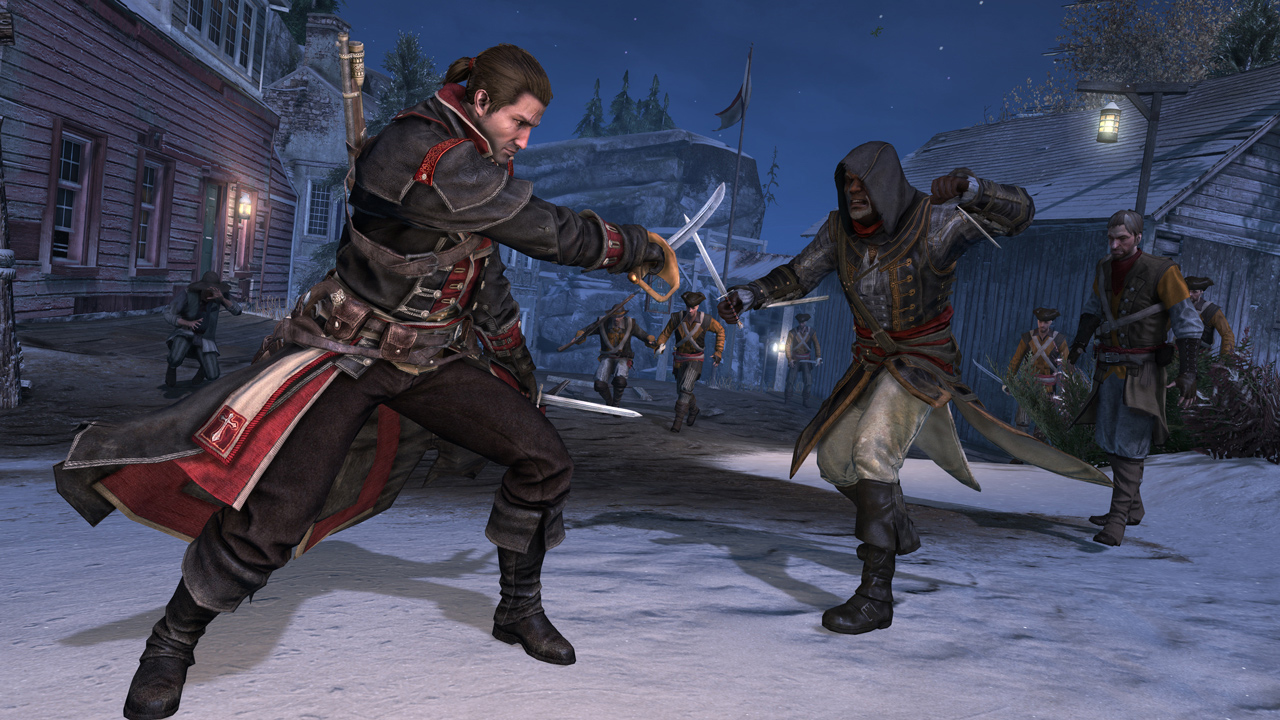 The quirks of a yearly franchise are still present in abundance though, and as addictive as it is, the game fails to address the flaky responsiveness of Ubisoft titles from this era. Combat can be janky, and holding in ZR to free-run over obstacles can often have you taking a wildly different path than you intended. At times, throughout all the titles included in this collection, I was let down by these issues. Boredom never factored into my decision to end a play session with The Rebel Collection, but I did hit the sleep button on one or two occasions to cool my seething rage following a run of glitchy, unreliable encounters. As the difficulty ramps up, these issues can become more prevalent, but ultimately it will all depend on your susceptibility to these factors as you play.

As for technical performance, the game is a standout success on Switch. Gone is the sagging frame rate and murky visuals of Assassin’s Creed III’s port, and in their place exists a beautifully rendered top-performer that rarely dips below its 30 FPS target. Granted, I haven’t spent as much time with Rogue as I have with IV and its DLC, but nearly 50 hours in and I have rarely encountered anything you could consider poorly optimized. Curiously, the game seems to eschew any form of anti-aliasing, and as a result of this, finer elements such as building edges and foliage can seem jaggy in the distance. There is an upshot to this decision, however, as the game looks incredibly crisp in the foreground – especially in handheld mode. The bright and tropical setting ultimately benefits from this decision as everything pops out of the screen with immense color and clarity.

Of all the clichés associated with reviewing Switch games, the phrase “perfect for Switch” is probably the most egregiously overused one among them. Therefore it physically pains me to have to resort to saying that Assassin’s Creed: The Rebel Collection is, in fact, perfect for Switch. The addictive loop of switching between traditional Assassin’s Creed gameplay and a full-blown pirate simulator is difficult to fault – and the drop-in, drop-out nature of the game’s exploration will keep you diving back in for weeks. Couple all of that with two-and-a-half games worth of content and its excellent performance – and The Rebel Collection becomes a quintessential Christmas release.

Assassin’s Creed: The Rebel Collection review copy provided by Ubisoft for the purposes of this review.