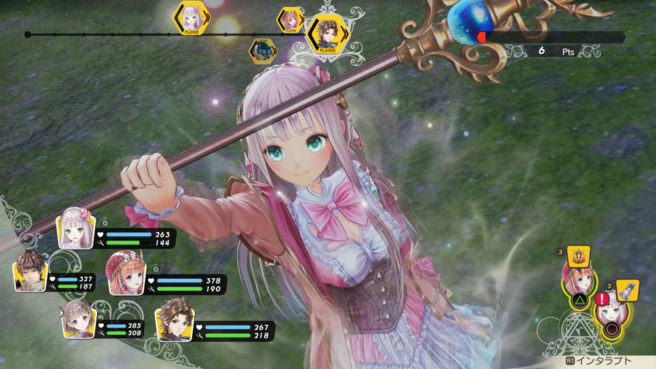 – Once the princess of the Arls Kingdom
– In Atelier Meruru, she worked hard to learn alchemy in order to develop Arls Kingdom enough for its merger with the Arland Republic
– With that important task now ended, she is currently traveling the world
– Originally a naive girl
– She has been freed of her “prinCESS duties,” and is now more motivated than ever

– A kind man and the director of Armster Nursery School in Arculis, whose top priority is the happiness of the children
– While the children love him, he works non-stop in hopes of their happiness
– Nowadays feels worn out
– He is often reckless and each time is scolded by Lulua and Eva
– He seems to have worked a different job before becoming director

A Threatening Figure Creeps Up on Lulua

– The “Alchemy Riddle” is an ancient text that only Lulua can read
– She will borrow its power in times of need
– A book that even Totori, one of Arland’s representative alchemists, cannot grasp the reality of
– Through the Alchemy Riddle’s guidance, Lulua will experience rapid growth as an alchemist
– That is not to say things are smooth sailing for Lulua

The Ancient Text that Guides Lulua / Advice from Totori

– Even Totori, one of the leading alchemists of Arland, has not heard of a mystery-filled book such as the Alchemy Riddle
– As such, Totori seems worried about Lulua, who relies on the ancient text
– Totori repeatedly advises her not to rely too much on the book, and to steadily move forward with her own strength

What Lulua Lacks / Her Resolution

– Lulua begins her growth as an alchemist thanks to the help of the Alchemy Riddle
– However, at certain times the Alchemy Riddle will not respond, or Lulua will not be able to decipher it
– In order to read and understand its pages, Lulua resolves to further travel the world with her supportive friends to broaden her horizons

– Along with the main characters that travel with you on your journey, many events are being prepared for the characters that live in towns like Arculis
– By progressing through the story and deepening your relationships with these characters, you will be able to experience all sorts of character events
– Use the shortcut command in town to see where events are occurring
– Check the places marked with a star to visit various characters

– Friendly and always full of energy
– Her feelings towards her mother can sometimes be quite strong
– Lulua respects her as an alchemist also
– Feels the pressure of Rorona’s reputation hanging over her as well
– In battle, in addition to the ability to synthesize items as an alchemist while powerless, she also plays a recovery role in that she can restore her party members’ MP and the like
– The always-curious Lulua takes interest in a rumor known as the “Two Great Beauties of Arculis”

– A girl who has always stayed by Lulua’s side
– While something like a saint, she shows a normally hidden side when it comes to Lulua
– In battle, she can use skills that change her attack range between one and several enemies
– This makes her good for battle against a large group
– Eva is harsh towards those who try to get close to Lulua, such as directing an intimidating air to Fickes, who is trying to get Lulua’s attention

– While Aurel has a reputation as a prodigy knight, he still has a long way to go before he is satisfied
– He is also worried about his career being tied to his last name, which is the name of the country Arland
– In battle, he overpowers enemies with quick sword techniques
– If placed in the rear, he can also support the party with various abilities such as healing

– Piana is the teacher that Lulua relies on
– Her skills as an alchemist are quite reliable
– While she watches over the growth of her disciple with kindness, she can sometimes be mischievous
– Since she is an alchemist like Lulua, she can also synthesize items in battle
– When placed in the front, she can use skills that not only deal direct damage, but also inflict enemies with status ailments
– It seems that Piana has had all sorts of experiences in her lifetime

– While each character possesses abilities that act as their specialties in battle, the bonds between characters will manifest new powers
– The “Primal Arts” that manifest depending on the combination of characters in the front will help you gain the upper hand in battle
– Forming a party of your favorite characters is one way to enjoy the game, but if you want to discover all sorts of Primal Arts, try forming the strongest party suited to your play style
– When Lulua and Nico are in the front, the Primal Art “Muscle & Slender” can be activated; by taking damage, the waiting time between turns will shorten
– When Lulua and Piana are in the front, the Primal Art “Power of Master and Disciple” can be activated; in addition to reducing the increase in stun value when taking damage, it also shortens the waiting time between turns after using an item