Posted on February 1, 2019 by Brian(@NE_Brian) in News, Screenshots, Switch 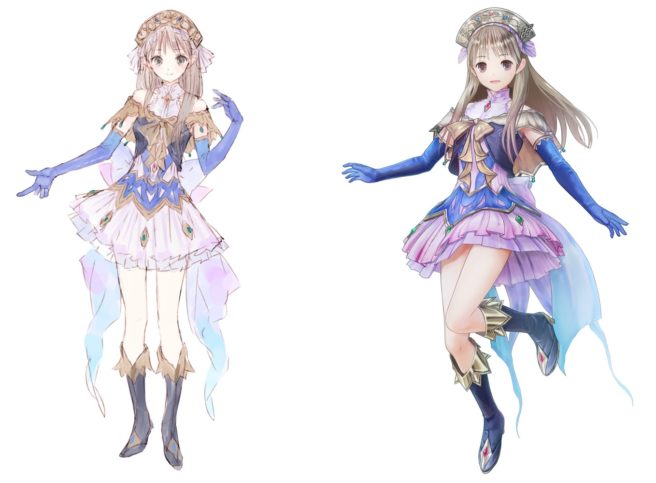 A new batch of details and screenshots are in for Atelier Lulua: The Scion of Arland. Today’s update covers returning characters Totooria “Totori” Helmold and Mimi Houllier von Schwarzlang, the Alchemy Riddle, Lulua’s journey, the evolved world of Arland, and the new “Awakening Effect” synthesis system. We’ve rounded up everything below, courtesy of Gematsu.

– An alchemy evangelist expanding worldwide
– An alchemist and disciple of Rorona
– Her skills in alchemy rival Rorona’s
– She is an influential player in alchemy in Arland
– She shares a blood sister-like relationship with Piana, and is currently working to take her alchemy worldwide
– Has long often unconsciously given others a sharp tongue, but nowadays she seems to be a lot more mindful

– The noble Totori’s bodyguard
– She is the most influential among adventurers in Arland
– Her spearmanship skills are among its best
– Close friends with Totori, who she travels with and is irreplaceable in her eyes
– Originally from a city of nobles, she is prideful and determined

The Mystery of the Alchemy Riddle

– The Alchemy Riddle is an ancient text that only Lulua can read
– When Lulua is in a pinch, it will suddenly emit a light, and alchemy-related information will rise to the surface
– Unknown who wrote it and why it appeared before Lulua
– There are many mysteries around this ancient text, but Lulua herself does not seem to care much
– She has the positive attitude that, “If I can study alchemy with the Alchemy Riddle, I might be able to become an alchemist like my mom!”

The Survival of the Atelier is in Danger!?

– A letter arrives for Rorona during her absence
– The letter is a notice from the Arland Republic that the business license for Rorona’s atelier wll expire
– In order to save her mother’s atelier, Lulua sets off for Arland
– Lulua is in panic about the possible disappearance of her beloved mother’s atelier
– With Piana’s advice, she heads to Arland
– Lulua’s hear hammers on the journey to her mother’s birthplace

A World Map that the Player Unfolds: Explore Every Corner of Arland

– Exploration based on Atelier Totori
– The system sees players explore maps to unlock new maps
– New maps will also appear by deciphering the Alchemy Riddle
– How Arland’s areas open up is up to you
– Formidable foes may be lurking in the map’s depths
– By gathering information on the monsters and collectible items that appear on a map, that map’s “Exploration Percentage” will rise
– When Exploration Percentage reaches 100 percent, the chance of finding high quality items increases

– The Eternal Spring Water Woods is a map of clear air and beautiful water
– It is also Arculis’ source of water
– In order synthesize an item requested by Aurel, the Alchemy Riddle guides Lulua and company here in search of the ingredients
– Lulua and Eva link up with Aurel, who had come to the area to exterminate monsters, and somewhat forcibly ask for his help
– How can they get the “Beard of the Big Fish” possessed by the Guardian that lives underwater?
– As Lulua and company are unsure of what to do, the Alchemy Riddle begins to shine again

Use Awakening Effects to Create Even Better Items

– There are various Awakening Effects
– Do not overlook those that can add new categories to synthesized items
– Ex: when you apply the “Awakening (Flavoring)” effect to the neutralizing agent, the neutralizing agent that would normally be a different category can be used for synthesizing ingredients from the Flavoring category