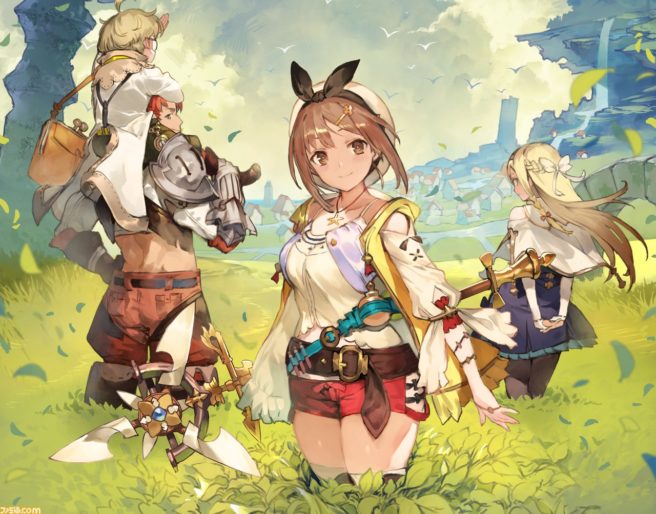 Atelier Raiza: The Queen of Eternal Darkness and the Secret Hideout is in development for Switch and other platforms, Famitsu has revealed. The game will be featured in this week’s issue as well as in the latest edition of Dengeki PlayStation.

The following details have leaked out of Dengeki PlayStation thus far (thanks Gematsu):

– Coming of age story
– The world is constructed through a new method of expression
– Scenario written by Gust and Shakugan no Shana manga creator Yashichiro Takahashi
– Character design is by Toridamono
– The protagonist is Raizalin Staud (voiced by Yuri Noguchi)
– She’s a normal girl who feels uneasy in her tranquil everyday life
– Seeking excitement, she is always on the lookout for something interesting with her friends
– Freewheeling girl with a strong sense of justice
– When she thinks she is right, it is not easy to tell her otherwise
– This is her story about finding something she never thought was so dear to herself after discovering alchemy and meeting a certain someone
– Three other characters: a male soldier, a female priest, and a child scholar
– As for the field, in order to depict daily life and adventuring even deeper than previous Atelier titles, the height of the sky, flower thickets, and the like are being made more realistically in order for players to get a greater sense of the land than before
– New turn-based command system for battles
– More tense and aggressive battles
– New system in which players get a sense of their bonds with other characters
– Synthesis utilizes a new system in which “creation” is the keyword
– It uses an easier to understand and more responsive format
– Rather than the tile-based systems of recent Atelier titles, it is now more of a a skill tree-like tree system
– For gathering, items change depending on the tool used, even at the same gathering points

– “Development is led by Gust’s Nagano studio, with myself as the sole producer.”
– “The concept itself was developed alongside Atelier Lulua. Full-blown development began around July 2018 at about the same time as Atelier Lulua.”
– “For the concept, I wanted to depict a coming of age story of boys and girls. So the concept of this game is something like, ‘summer memories.’”
– “The graphics are more realistic and have life-like proportions, which is a significant change from our visual expression… thus far starting with Atelier Sophie, but this time we are doing a complete overhaul.”
– “We’re working hard on the visual side to depict summer memories and the new expressions we want to see.”
– “We’re also trying to find a balance between photo-realism and ‘toon rendering’ using graphics we are capable of making.”
– “There won’t be any romance, but there are some more or less bittersweet moments. They won’t develop into love though (laughs).”
– “There are character episode and side story-like elements, but there won’t be any individual endings.”
– “Development is simply difficult all around! (Laughs.) From here on it will be even more rigorous as we continue to polish the game to ensure it’s fun.”
– “We chose Toridamono as character designer because he is able to draw appealing illustrations, but also because his art has a certain charm that’s unique to himself.”
– “Raiza is a lively one! She is similar to Lulua in a way, but not as impulsive as her. She’s a lively child who really doesn’t know much about the world.”
– “The three others aside from Raiza are her friends who she spends her time with. This is a story of these children growing up.”
– “Toridamono really fixated on getting Raiza’s thighs right. There were even staff on the Gust side that followed his lead (laughs).”
– “The catch copy (Bye-bye, Atelier. I will never forget this adventure.) is a reference to the Atelier in which Raiza and her friends spend their days, not a goodbye to the Atelier series.”
– “The scenario is being produced in the way that we did Blue Reflection. The plot feels like it was written by Takahashi while coming up with it at Gust.”
– “For the subtitle, we wanted to sound fresh and new, so our subtitle is made up of the game’s keywords.”
– “For the music, we’ve asked for those charge of previous Atelier games, as well as new folks to create high-quality music befitting of the game.”
– “Synthesis, gathering, and battle being the core three elements of the game has not changed.”
– “For players, the feelings of familiarity and relief [in games staying the same] have gradually become a groove that haven’t been able to get out of, so this time there is big change at the core of the game.”
– “Our goal is for Atelier Raiza to utilize all of our experience thus far, what makes our games interesting, and what we do best, while also challenging the game systems. Since we are evolving and revising various parts, I think it will be a game of considerable change.”
– “Since both the story and systems are changing, some players might be dissatisfied, but we’re prepared for that. But this is the first step towards a new Atelier, so we want people to experience it.”
– “We want to release it before it gets cold out. Development is currently 45 percent complete.”

Atelier Raiza: The Queen of Eternal Darkness and the Secret Hideout launches this fall in Japan. View a teaser trailer for the game below.