Ayo the Clown getting a physical release on Switch 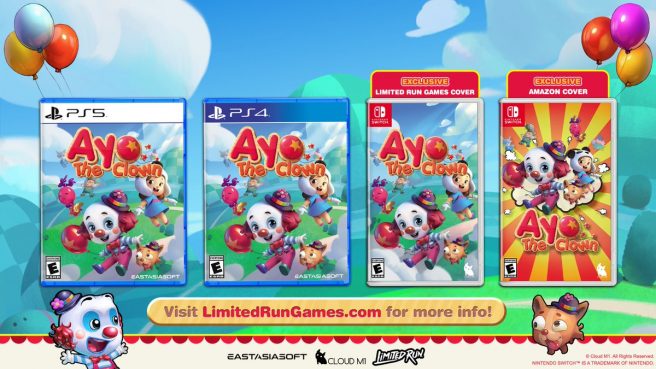 Limited Run Games is readying a physical release of Ayo the Clown on Switch, the company announced today. It will only be sold as a standard edition.

Ayo the Clown previously appeared on Switch in July 2021. It was originally sold only as an eShop download.

Here’s some information about the title for those that need a refresher:

In Ayo’s hometown, things are generally peaceful. Accompanied by his talented circus dog, Bo, Ayo juggles in the park, hangs out at the carnival and longs after the Shoemaker’s granddaughter. Until one day, Bo goes missing!

You play as Ayo, your not-so-average clown, in search of his best friend and beloved dog who has mysteriously disappeared. What happened to Bo? Will they ever juggle together at the park again? Or set up that circus act they’ve always planned? You’ll find out along this incredible adventure as you strive to reunite clown and dog. Like all good adventures, you won’t be all on your own. Ayo’s world is full of friendly people and interesting creatures that are willing to lend a helping hand.

Pre-orders for the physical version of Ayo the Clown on Switch start on December 13, 2022. Reservations will be held via Limited Run Games here. It’ll also be up on the company’s Amazon store with an exclusive cover variant.