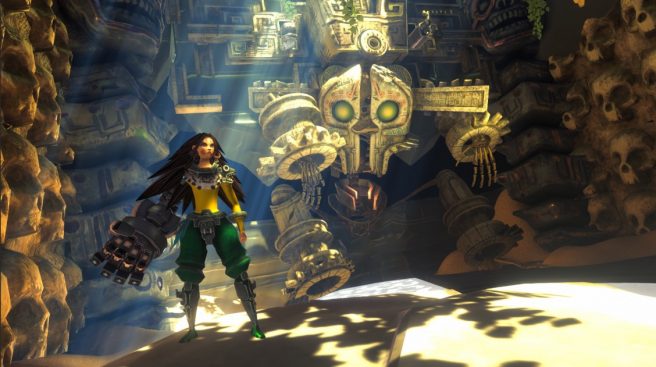 We were originally going to see Aztech Forgotten Gods last fall. However, Lienzo pushed the game back to Q1 2022 last August.

Guide Achtli, a cybernetically enhanced warrior, on a quest to save Tenochtitlan, her home and the crown of the Aztec Empire. For centuries, the Aztec people and their city have thrived away from European interference, leading to unprecedented technological advancements. Now, something strange stirs, and the awakening of an unfamiliar enemy threatens the very survival of the Mesoamerican metropolis.

Armed with Lightkeeper, a powerful prosthetic arm powered by a mysterious energy, Achtli must stand tall against fearsome foes. Harness Lightkeeper’s latent abilities to leap into action, delivering shattering blows to gods seeking to wipe out her beloved city. Use Lightkeeper to propel Achtli across Tenochtitlan, zooming past floating buildings, grinding brightly lit railings, and bringing her close to pummel colossi standing in her way before hammering them with rocket-powered strikes.

Engage in action-packed combat blending mobility and precision timing during intense showdowns. Master aerial maneuvers to out-position, flank, and strike critical weaknesses to turn the tide of combat in Achtli’s favor. Embrace the power of Lightkeeper to become a guardian of Tenochtitlan and the Aztec people.

Aztech Forgotten Gods will be sold digitally for Switch via the eShop. It will include English, Spanish, French, Italian, German, and Russian language options.