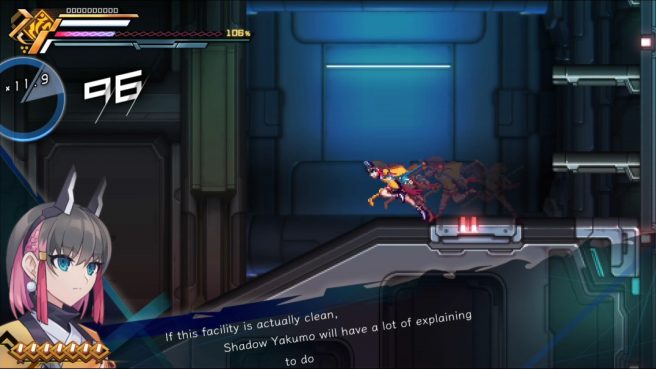 Azure Striker Gunvolt 3 marks the first time that the series will feature English voices. The game will feature the following actors:

Below is a trailer highlighting the English voice cast:

Outside of the voice cast news for Azure Striker Gunvolt 3, Inti Creates passed along news about the Story Mode+ where “the thrilling near-future dystopian story plays out in real-time”. Here’s the full rundown:

As the world’s only Adept with the ability to seal others’ powers, Kirin dispatches on a mission from her organization, Shadow Yakumo, to deal with the one-and-only Gunvolt. The Adept once known as the Azure Striker, Gunvolt has transformed into a “Primal Dragon” and been sealed behind 1000 sacred swords.

As the story progresses, more and more fascinating characters take the stage, delivering fully voiced dialogue without stopping the high-paced action thanks to the Story Mode+ system.

Characters will talk and banter during gameplay, allowing their personalities to shine and the story to develop without diluting the pure action gameplay.

And for the first time in the Gunvolt series, English-speaking fans can enjoy the real-time “Story Mode+” conversations without taking their eyes from the action!